I love this set, and find it really hard to resist adding all I can find to my collection when I come across a bin with hits from these sets. 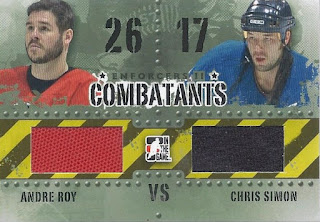 Both my last purchase of Enforcers hits and this grouping included one dual relic card. On both of them, Chris Simon is one of the two featured players. Then, I was more interested in a photo that showed the reasoning behind the Rob Ray rule. Here, I'm interested in the Senators relic more than Mr. Simon. I really should get a single hit of his from any source just to remove the guilt. 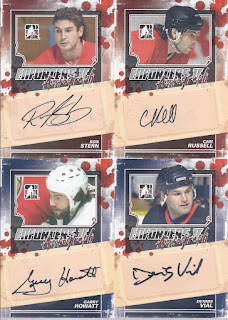 And your autographs. The Dennis Vial continues the Senators love with my second hit of his, both autographs. I thought the Russell was a dupe that I could send to Jeff @ 2*3 Heroes, but it wasn't. Next time! Garry Howatt has some nice penmanship, but brings one of my favourite hockey nicknames to the table with 'Toy Tiger'. Finally, Ronnie Stern was another one of my favourite early 90s tough guys, and he's the only one of this group to crack the magical 2000 PIM club.

I now have 22 autos from both the first and second Enforcers release, and that barely puts a dent into the collection.

Posted by buckstorecards at 14:18