Just three cards, but I think they're worthy of a post of their own. 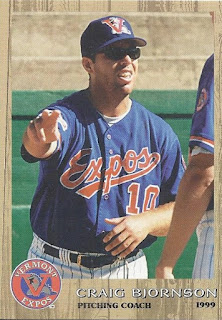 The first card isn't on its way to the Expos binder, but instead will be joining the 2/14 collection. Craig Bjornson also is the third member of a pretty specific portion of the binder, being players that I have cards of both as a coach and as a player. He's also the only one for whom those cards are both minor league issues. The other two? Bernie Geoffrion (Canadiens and Atlanta Flames) and Fred Carter (who both played for and coached the Philadephia 76ers).

Here, Craig is shown as the pitching coach on the Vermont Expos. When the Expos moved, they briefly retained their affiliation with the Nationals, and are now an Oakland affiliate, calling themselves the Lake Monsters. They probably could have kept that logo and just changed the text. 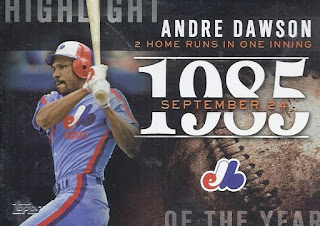 And now, from the days where there was a team in Montreal to now, where Expos still show up on occasion in Topps set. This card salutes a game in which Montreal beat the Cubs 17-15, but almost blew a 15-2 lead in the process. Andre smacked a pair of 3-run homers in the 5th, on a day that the wind might have been a little gusty, and blowing out at Wrigley. 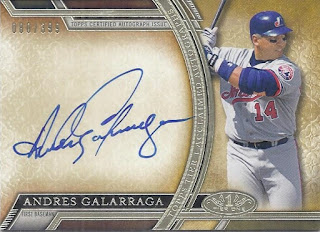 And let's wrap it up with a really nice auto, both in terms of aesthetics and in terms of adding it to my Montreal binder. While Expos cards have been showing up in Archives with a pleasant regularity (I've pulled DeShields and Grissom from boxes), it is so nice to see them in higher end releases as well. Andres' autos tend to go for a decent sum, so getting one for $7.00 in COMC credit was an easy decision.

And there are my three newest Expos cards.
Posted by buckstorecards at 16:03