When Target announced their departure from Canada, I started picking up their repacks and putting them aside for future busting and posting. Sounds like the time to do another one of these, reaching into the storage area and pulling out a repack with 10 baseball packs.

These were the packs (I'm assuming all are retail)

Might as well start with the flagship packs, and throw Opening Day in there as well to make it an even 5-5 split over two posts.

I didn't buy too much of flagship in '14, opting to build the Heritage set and to limit myself to a factory set of flagship. So, this really has me on the lookout for inserts, and cards for the PC. So, I'm on the lookout for Jays, Mets, inserts, parallels and interesting photos. I'll only hit the highlights of the packs with more than a scanner bed worth of cards in them. So, one 8 card pack of S2 and the 7 card pack of Opening Day gets highlighted. 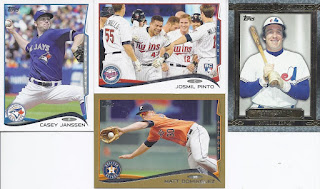 I'm happy with this start. I add the Gary Carter insert to my Expos binder, the Janssen to my Jays binder, the Pinto's photo is great enough to get into the misc. binder and a numbered parallel to wrap  it up. 4 for 12 is pretty respectable for a single pack.

3 packs of this, let's see what goes into the old PC. 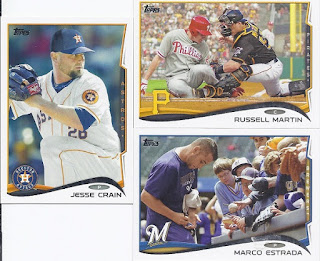 A pair of cards for my CanCon collection in the first pack is a good start. And an autograph signing card of a future Blue Jay. Nice start. 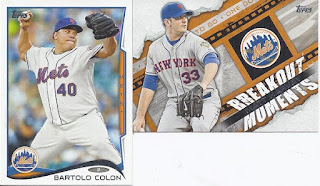 Pack #2 featured a lot of cards that were a hair or three off-center. But, two Mets cards is enough to make me ignore that.

And your final pack of S2: 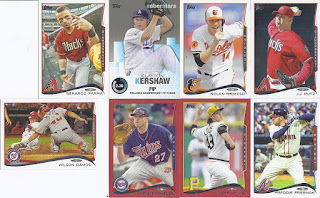 Pretty good! A nice Play At the Plate photo. An insert and a pair of Target parallels. Probably the best one, at least for me, of the three. The Freeman and Parra were actually dupes from Pack #2. 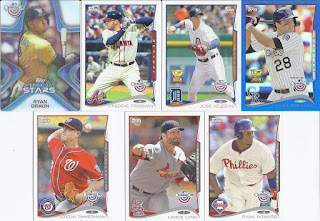 I admit to checking to see if that Ryan Howard was some SSP sparkle parallel. It wasn't. The Arenado is, much like the gold parallels in flagship, numbered to 2014. As for the Braun...

It was the same card I pulled from my only previous pack of 2014 Opening Day.

And there you have it. Lots more variety of sets covered in Part 2 of this.

Posted by buckstorecards at 13:14