I really had no way to group the final 3 packs of this, so they get grouped together here. This group did contain my favourite single pull of the break, which seems like a perfect way to wrap this up. 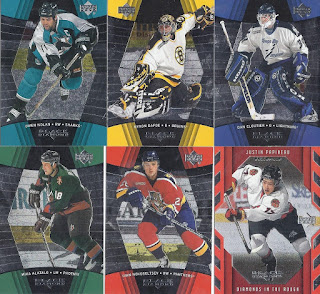 Black Diamond 1999 starts off this group. There are some strange choices for a small numbered set in this group. But, as I said with the first pack of these, the design is so much better with some colour involved in the base design. The Dafoe is a really nice photo for a set not really known for them. 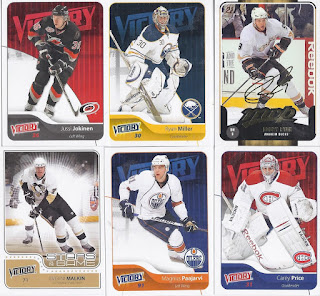 At least the Victory pack landed me a couple new cards for the mask binder.

Starting off with the Donruss pack was a trio of trade bait cards. There's a new T.J. card for when I send another PWE to the Junior Junkie and a pair of Wolverines alum for my next TMM envelope. Actually, the next to the next one, since I've already got an envelope taped up and ready to go in the meantime and in between time. 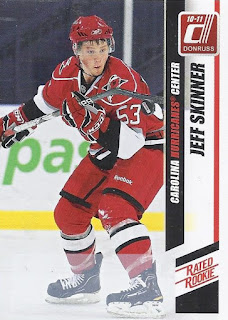 And the best card (at least for me) in the break. How about a Rated Rookie card of a Kitchener Rangers alum, and an interesting photo as well? When I looked this up on COMC, there are both white box and non-white box variations of this. This is the former, and seemingly the scarcer of the two. I thought this was meant to be autographed, but there is no indication of that anywhere else on the card.

And there you have another repack posted.

Posted by buckstorecards at 10:21