Prior to this past very enjoyable season, there weren't a lot of benefits to my Raptors loyalty. But, one was that they were vary cheap dates in group breaks. The rookies for the team were solid, but rarely headline grabbing enough to warrant a huge cost. It is a benefit from playing in the great barren wasteland that is Toronto.

That said, I grabbed the Raptors in several recent basketball breaks at mojobreak. A couple mixers of varied products, and a case break of Crusade.

I'll lead with the most recent stuff from Crusade.

One of the good things is that the base cards are shipped, which is great for a team collector such as myself. So, I added these rather nice looking cards. They remind me of UD Artifacts Hockey with the backgrounds. 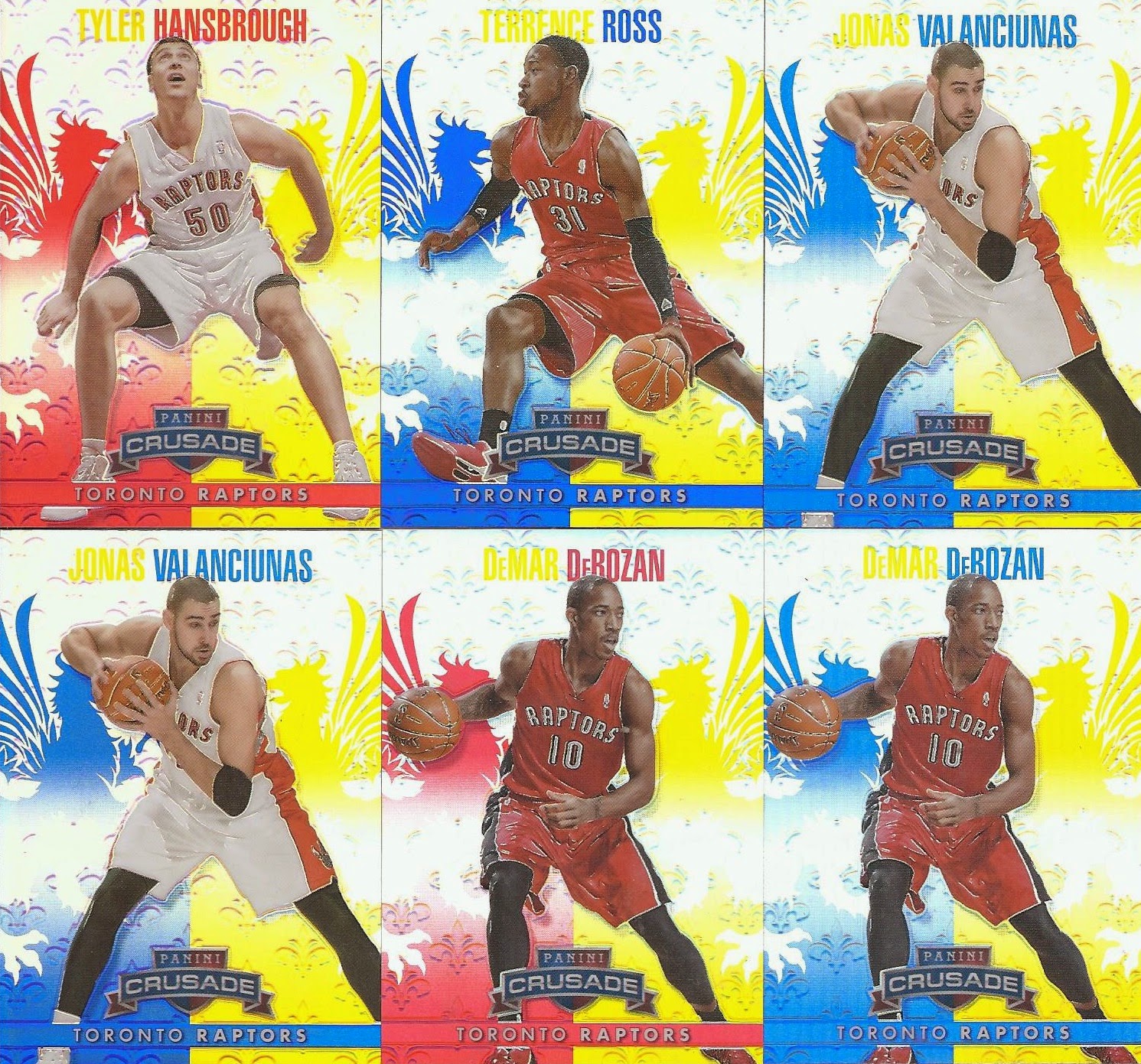 These Crusades aren't as bright as thy seem in the scan. The reds are /349. I really love how the red looks with the red jersey on Demar. 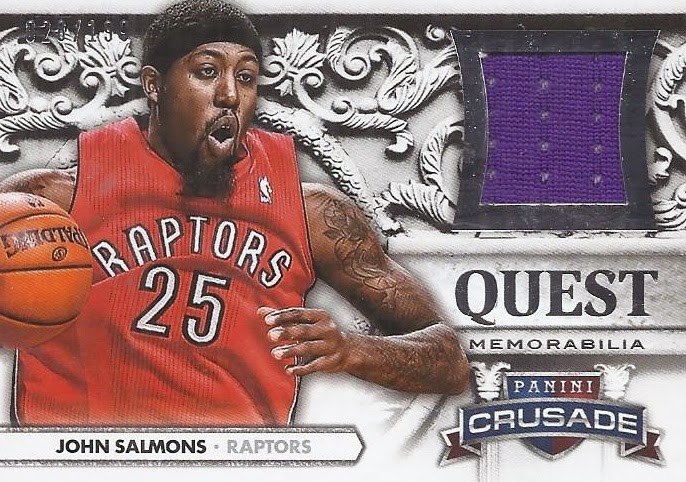 That's totally not a Raptors jersey. The back even states that it comes from either a Sacramento or Milwaukee jersey (you'd think they could tell the difference between a Kings and Bucks jersey when they're producing the cards). The best thing is that this is my first card of any of the players that came to Toronto in the Rudy Gay trade. 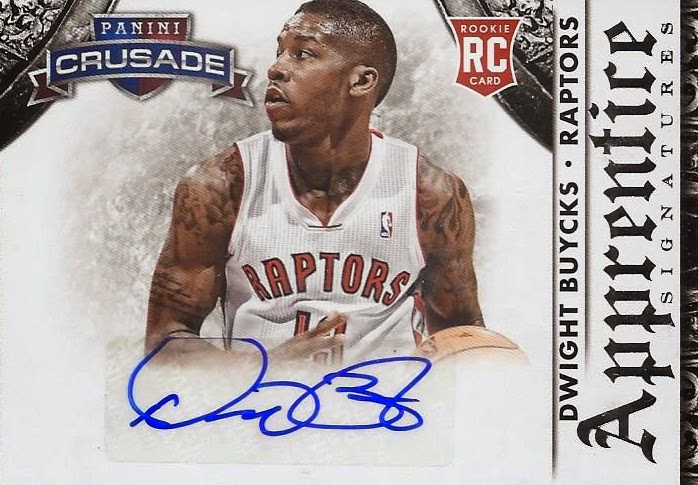 And the second hit is of the only rookie the Raptors had in sets last year - Dwight Buycks. He didn't see much time, and spent some time in the D-League, but it is still a Raptors auto, and still one I'm happy to have for the obscurity factor.

As for the few mixers, here are some of the highlights.

Some very bright die-cuts from this year's Prizm. Unlike the Crusades, these are as loud in hand as in scan. 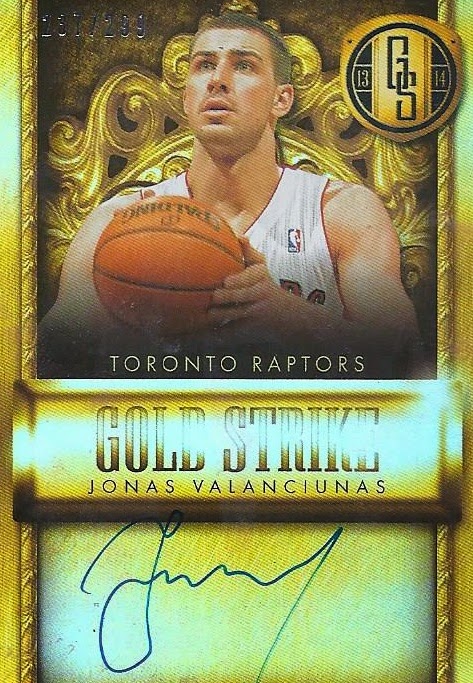 My second auto of Jonas Valanciunas. His penmanship isn't much, but it is a nice looking as an on-card auto. 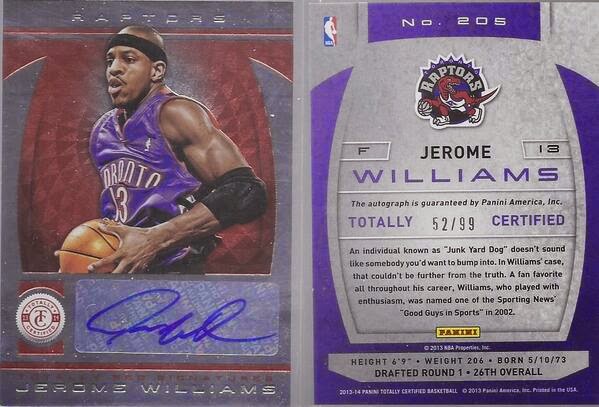 Here's one more auto. Toronto sure loved JYD during his time there. Even better, the back of the card deviates from the usual Raptors look for this year's releases to use the purple from the time period. 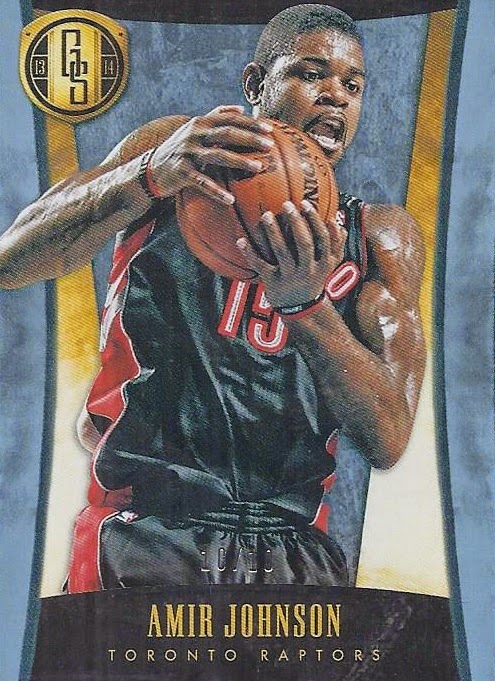 Another Gold Standard card, and my lowest numbered card from the breaks. A /10 of Amir Johnson.

Oh yes. And this: 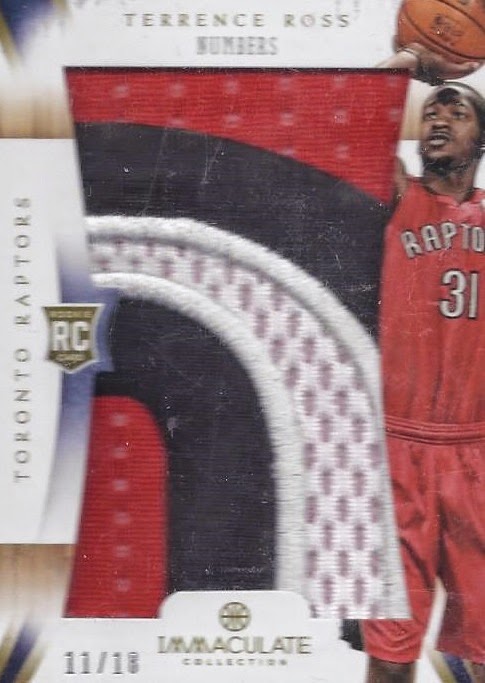 Now this is what a patch numbered to /18 should look like. A huge piece from the the 3 on the front of the jersey. Is this a centrepiece card for my Raptors collection? I don't really have any other candidiates. It is event worn as opposed to being a game worn, but I can pretend that this is from the All-Star weekend (That's an event, right?) and it becomes a little better than something from a photoshoot. Even the photo is perfect, as you can just picture the exact point on the jersey the card comes from.

So, sure, I'm one of few Raptors team collectors out there. But there is a slight benefit from that - a chance from some great cards for a cost of a hobby pack or two.
Posted by buckstorecards at 14:43