While at the LCS yesterday sampling the new UD SP Authentic, I also grabbed a few packs of the new Score Football. I thought it was a retail product, but I didn't come across any at the local big box stores, so this will have to do. Much like last year, the set's checklist is put together pretty much the same way. 1-230 are the base cards. 231-330 is a Hot 100 subset. 331-440 are the rookies.

I love the low end base product, since I pick it up for set building, not the mega hits. So, what I look for with this is fun and interesting photos. If they don't have that, I might as well buy higher end stuff and try for a nice hit.

I probably should have tried a couple more packs of SP Authentic. 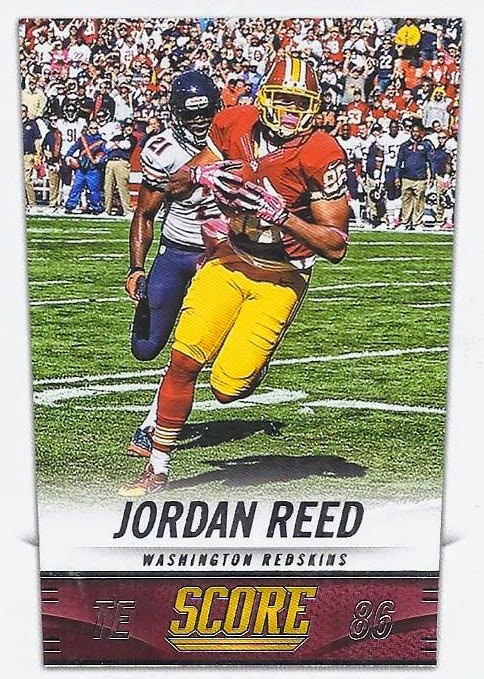 Out of 4 packs, this one was my favourite photo of the bunch. It is also the only one where the player wasn't closely cropped, ala Topps flagship. Out of the 23 base cards in the 1-230 portion of the set, only 9 of them used a photo where any member of the opposing team was even visible. No QBs remaining calm under pressure. No RBs busting through the line. No catches being made in double coverage. Just purely generic photos. Blah. 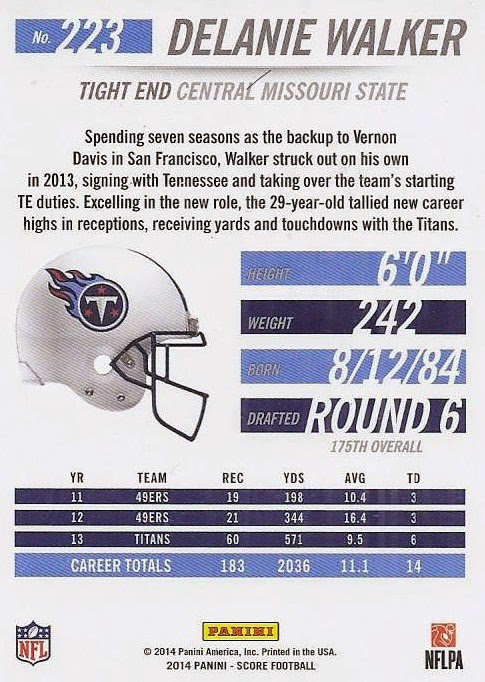 Here are the backs. They're nice and colourful, but only include 3 years of complete stats. Still, they are nice and legible, so there's at least one thing I can like about this. 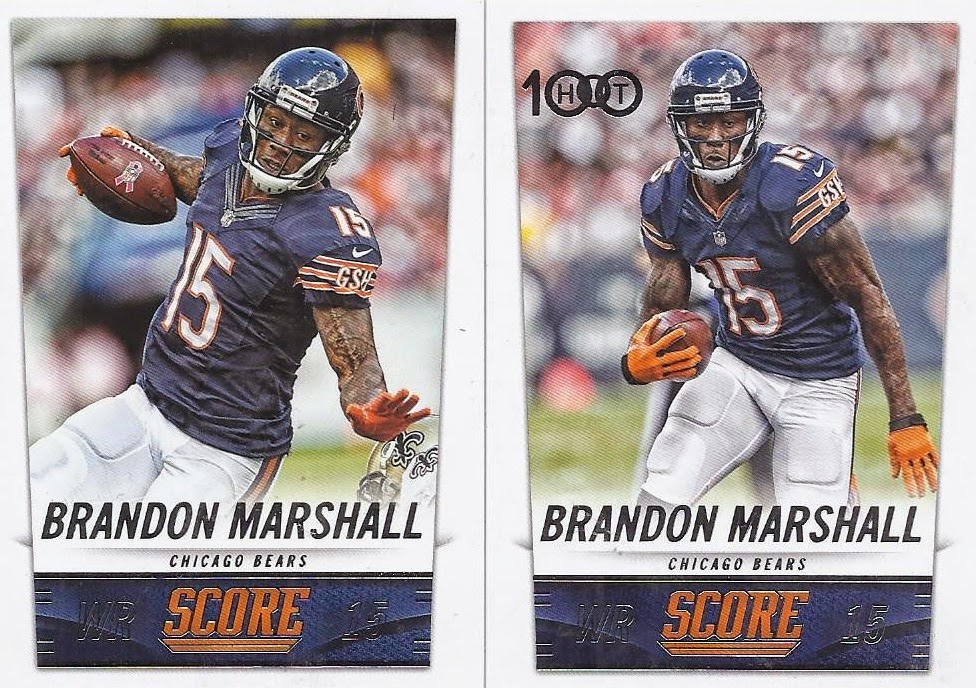 Next up are the Hot 100 cards. Much like last year, this is just another excuse get more base cards of the big names out there. The only difference is the Hot 100 limits it to only one card per player. Last year, a QB could make an appearance in the base set, in the Airmail subset and the Franchise subset.The logo is the only difference between this insert and the base cards. 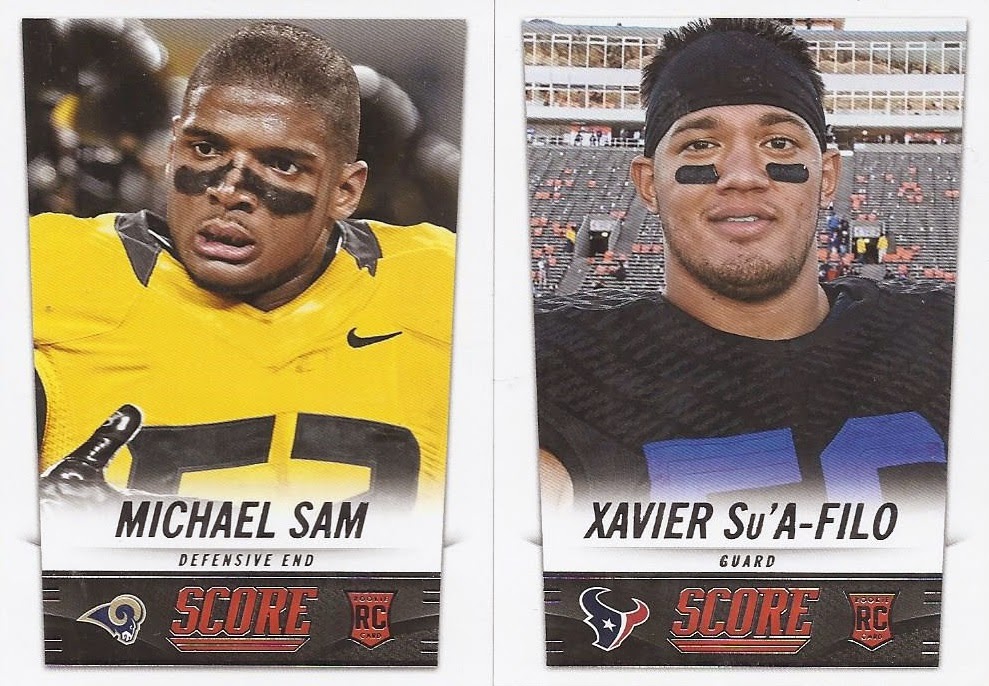 And just like last year, the rookies are generic head shots with the college logos photoshopped away. As always for me, I do like it when OL guys get a card in the base set, since they probably won't see too many more of those throughout their career. These are what they are for an early release. I'll take these ones that at least have the NFL logos.

So, the base set is uninspired at best. Can the inserts save it? 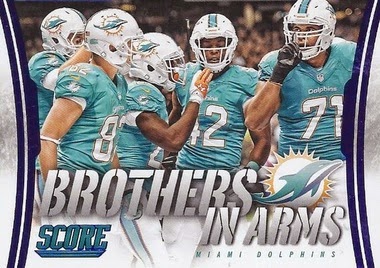 The Brothers in Arms seems just like the team cards in Topps last year. So, based on the first pack, the answer was no. 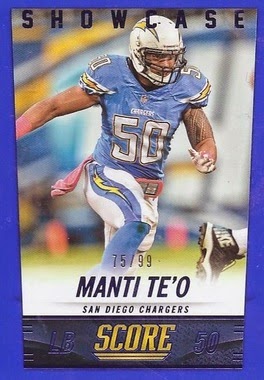 I did get one of the numbered parallels. The blue does work beautifully with the San Diego uniform, so this does seem like a nice card to pull. I wonder if the other parallels stand out as well. 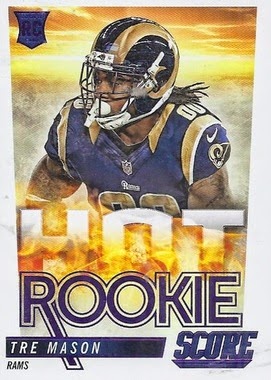 Much like last year, the Hot Rookies subset just goes to show that they could have photoshopped the players into their new uniforms. I don't have too many problems with it, but I wish they had done like last season and use a significant departure from the base cards to make this feel like an insert. 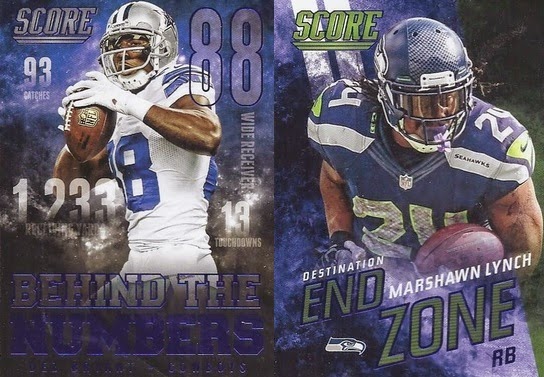 But these two are gorgeous. Dez Bryant's BTN card incorporates his actual numbers into the design on the front, so it gets the vibe of some of the 1995 Fleer issues. With the card using very basic colours instead of the varied ones in that set, it doesn't get too obnoxiously busy. I'm not sure who the Bills cards are in these set, but I can see myself going after those.

There are no Bills in these two subsets. FML.

Then I thought I was being too harsh. Maybe, I should pick up something to compare it to. While they didn't have regular packs of last year's Score, there were a couple jumbo packs. So, I tried one of those. How do the base photos compare? 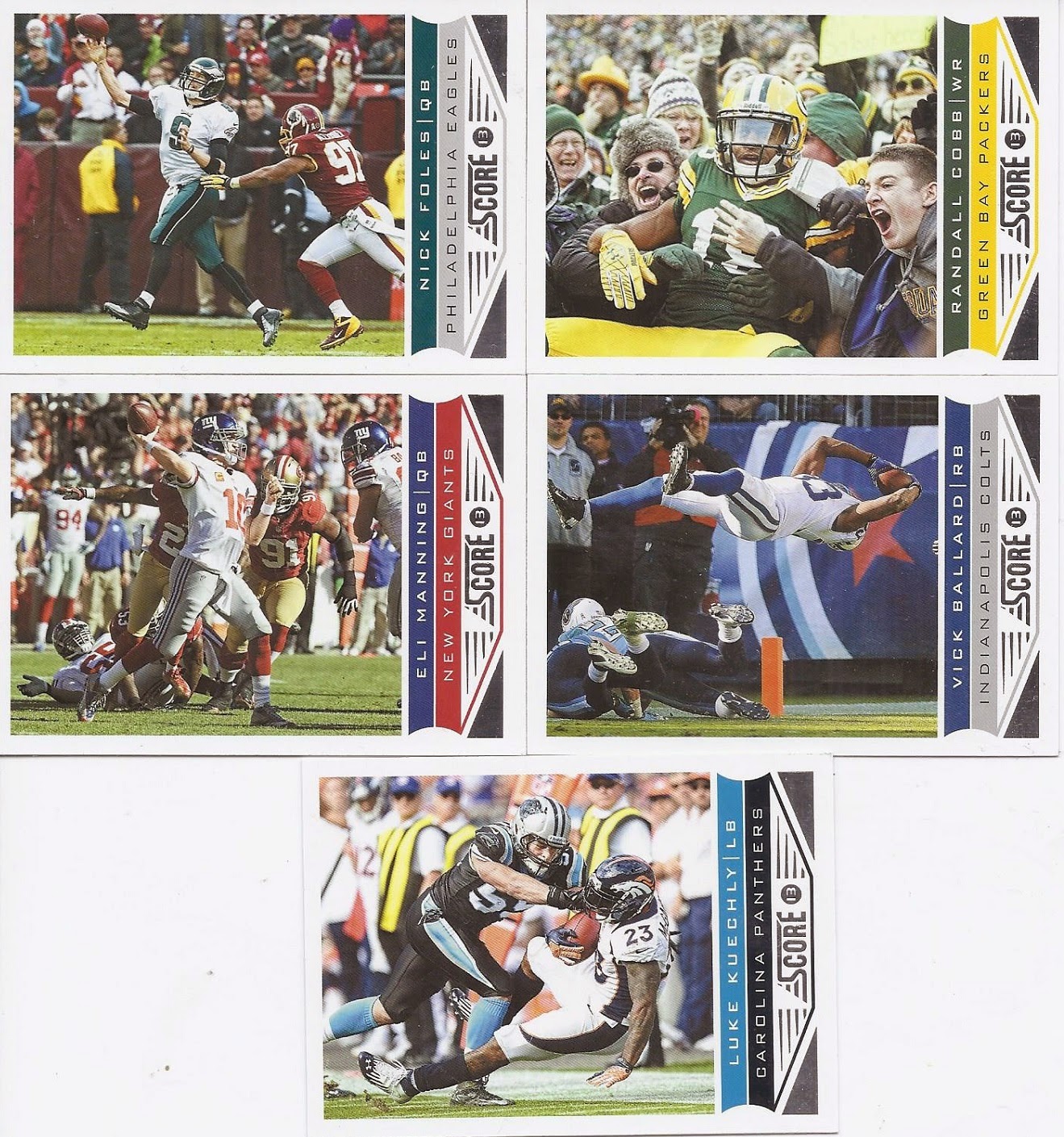 OK. So maybe I should make the comparison using vertical pictures, since there were a grand total of zero of those in my 2014 packs. But before I do, I must state the obvious that the Randall Cobb card a beauty. On to the vertical cards. 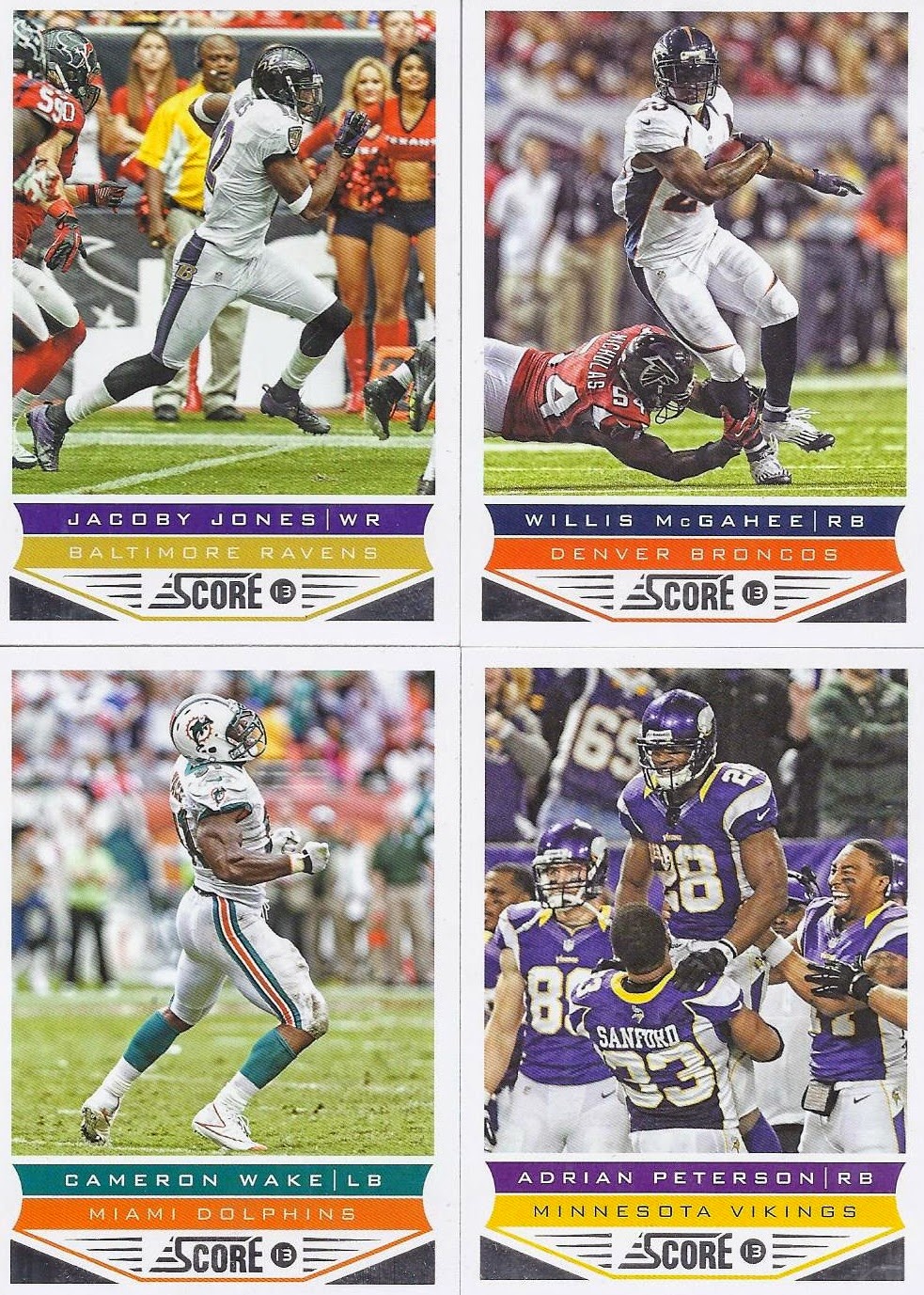 Inserts! That's gonna be the ticket! 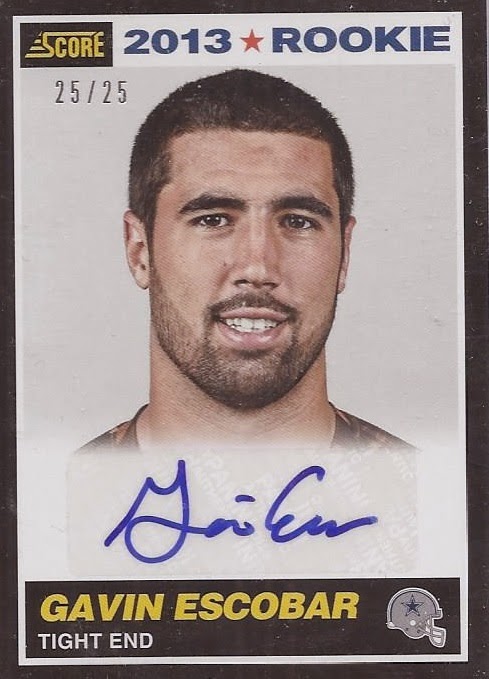 This just isn't a fair fight.

I think I'll wait for Topps flagship.
Posted by buckstorecards at 13:18