Here's the last of the first 16 packs. 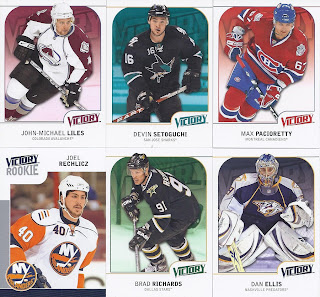 This really is not the most exciting group of cards to open it up. Devin's a guarantee for miscellany binder. The teal background really looks good behind the black uniform. Rechlicz is another journeyman enforcer type player. He's actually made a really interesting run to the NHL. Might be another candidate to join Devin in the binder. I've already put the Pacioretty card in the trade pile for a certain Michigan fan. 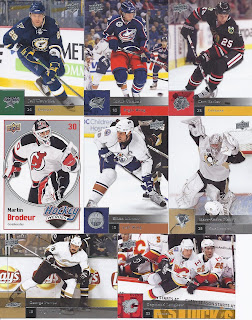 It is hard to hate an Upper Deck hockey pack from their flagship set. At least one card in the pack will have an interesting photo. Langkow's a great horizontal card, and it is hard to hate any card of the mustachioed Parros. Still, the celebratory Marc-Andre card is easily my favourite of this bunch. 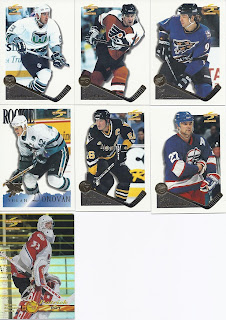 The oldest pack of cards that were in the box yielded these 96-97 Summits. A nice LeClair photo is my highlight here. 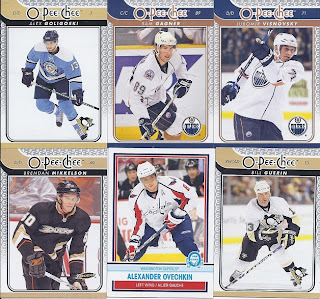 Wrapping it up with the closest thing to a hit in the box - a 2009 OPC Retro Ovechkin. For now, it is one for the old hard toploader but it might end up as tradebait at some point.

So, that's one box down. One to go. With the discount, I certainly got my money's worth from the box - which worked out to about $1 a pack. The only truly dud pack was the Topps Attax.
Posted by buckstorecards at 14:31