My goodness. I can almost see the back of the box as these cards move from there into various binders. One more day of this. Then I can get back to busting El Cheapo repacks or a single card a day.

But, in the meantime: 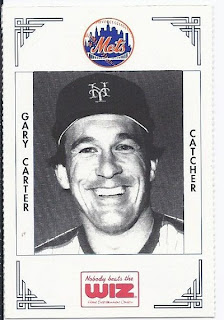 Opening up with one of the oddballs I picked up, and among a handful of Gary Carters I grabbed that day. Strangely, I pulled this out of an Expos box. Perforated edges, and the logo of a defunct local electronics store on the card. Smaller than a typical card as well, but bigger than your typical mini. Everything about it screams that it is completely bargain basement, but I couldn't resist. 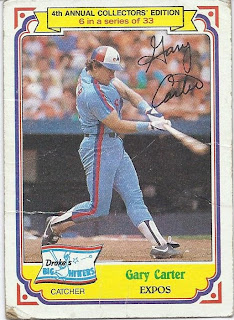 That wasn't even the only oddball Gary Carter I grabbed. This one here was another one, and it was by far the worst conditioned Carter I grabbed that day. Still, it is the classic blue uniform of the Expos and a unique enough card. Creases? Horrible corners? Who cares? 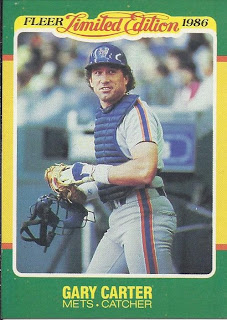 Finally, something a little more mainstream. 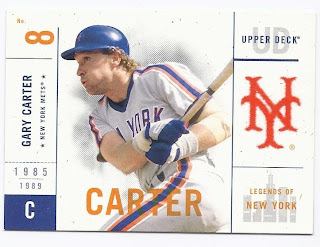 Definitely more mainstream than the first, but it bizarrely lists Gary as a second baseman on the back of the card. 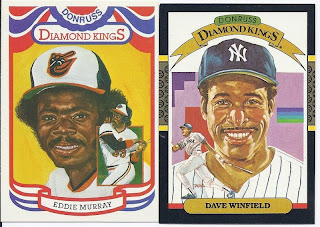 I did grab a good number of Diamond Kings at the show, and they've been posted already. These two might have been my favourite portraits of the bunch that don't count Mets or Jays. 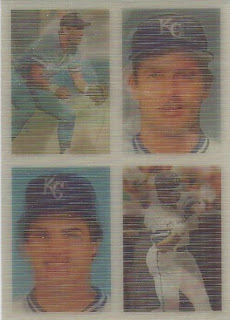 I'd hinted at this one before. A 12-in-1 Sportflics card saluting the 1985 World Series Champions. My only complaint is that they list the players on the back, but they don't correspond in any way to the placing on the card. While I don't need to have Dan Quisenberry or George Brett pointed out to me, Dane Iorg and Darryl Motley are other stories.

12 players kinda makes this 4-in-1 Brewers card pale in comparison. 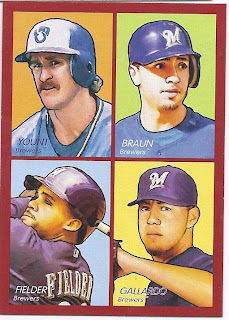 Posted by buckstorecards at 13:30