These arrived today. Plus, my COMC goodies have yet to show up, so you're stuck with this. 5 boxes of 2006 UD Artifacts. I picked the Mets. I got randomed the Brewers (just like this month). The cards truly fell my way in this break. Out of the 20 hits from the boxes, I ended up with 4 of them and complete base sets for both of my teams. 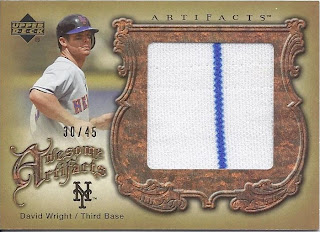 Beautiful. This beauty popped out of the first pack of the break. I guess the pinstripe could have been a smidgen closer to the middle, if I must pick a nit about it. The Brandon Sutter I picked up yesterday was the largest swatch I had in my possession for just over 24 hours. And the Mets hits just kept on coming in the 5th box. 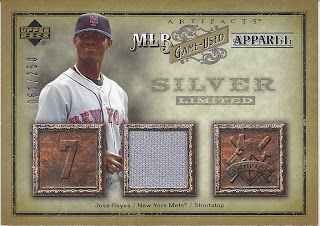 A card of a guy who, come April, will join my binder of players who have played for both the Mets and Jays. Boy, my dream team of players who fit that category has just gotten a lot stronger over the past month or so. I've really got to put together a small binder of those sometime soon. 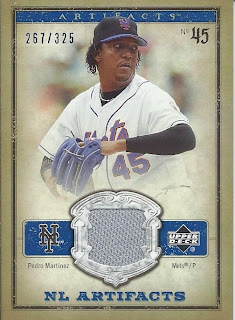 And why not a third Mets relic as well? Wow. 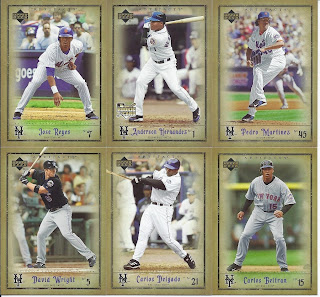 And here's the Mets team set. Beltran's is pretty blah, but the rest of the cards are all quite nice.

Off to my random team. The hits kept coming with them too, as the third box. 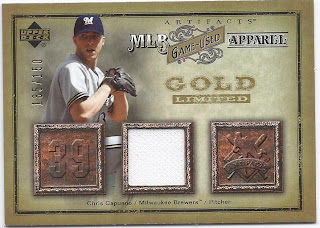 This is not a mind-blowing hit. But it is a former Met, and a guy who is still active in the bigs. A nice surprise out of my second team.

And here's the Brewers team set. I ended up with 3 Prince Fielders, and was willing to pass along one or two of them randomed to a hitless breaker. Sadly, the packages were already done, so I guess I'll just have to put one of them up cheaply on listia.

Thanks for another great group break!

Posted by buckstorecards at 18:59