Time to wrap up the goodies from a baseball dime box. For now. I went to the local show this morning, with a goal of expanding on two of my personal binders. I have one for goalie masks and for players that I share a birthday with. I did add a few relics that fit into the latter category, but I then noticed a rarity for this small show. 2 baseball dime boxes. That put quite the dent in both my time, and, since I didn't bring a lot of cash with me (MORON!), my funds. But I did get some nice insert cards, and some interesting early 80s cards out of the deal, so it is still a win for me.  So, at some point I'll get to those, once I get through some of my budget hockey pack and blaster busts over the next while.

In the meantime, let's look at the last of the Expo dime boxes. 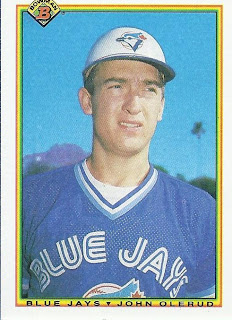 I have a lot of 1990 Oleruds. Probably most of them. But not a single one of these until I sacrificed a dime to get this one. 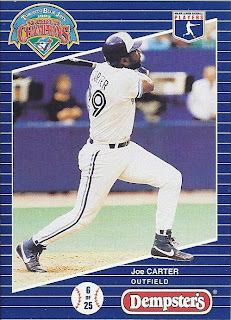 How about a tasty Joe Carter from a Dempster's bread set? 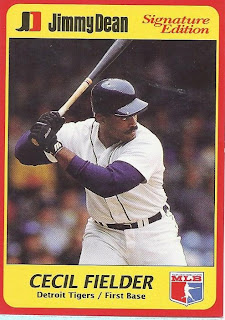 Or an equally yummy Cecil Fielder from Jimmy Dean? 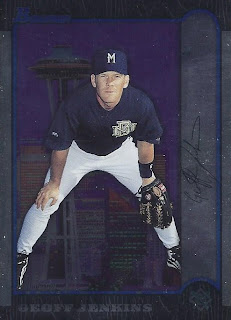 I grabbed this one because it reminded me of the backs of the 1993 Leaf cards. The fact it is a hometown reference as opposed to the playing city made it a little more interesting to me. It took me a second or two of looking at it to realize that it wasn't a guy from the Mariners with the Space Needle in his background. 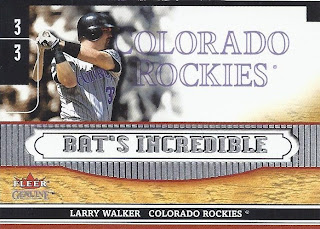 How about a cheesy pun to continue this post? 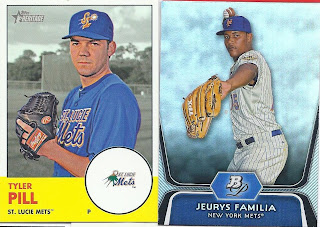 And my month plus worth of Expo posts should have probably wrapped up with a Montreal Expos related post, but I'll instead do so with a couple of Mets.

And, unless I open the Blue Jays fire safety card team bags, that's the end of the box.
Posted by buckstorecards at 17:01