I just went in with a small wantlist, hoping to find something for my various binders. Therefore, I elected to only bring $20 with me, as I figured that would be enough. Turns out I spent most of my time there searching through a Canadian rarity - the baseball dime box. But, I still walked around and found a few hits to make their way into a few of my binders.

First up, I added 3 hits to the front page of the my 2/14 birthday binder. 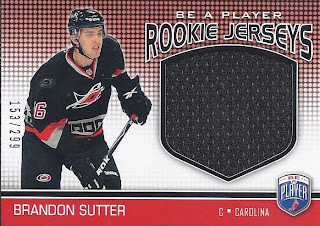 All these cards were $2.00. This was one that I had my eyes on over at COMC, but wasn't willing to part with about $8 for it. This was far more reasonable. A nice sized swatch as well. Plus, it is a member of hockey's most famous family. 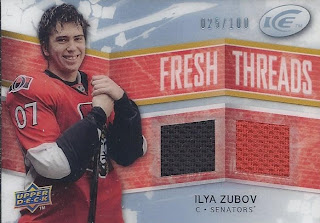 This was a player who I had little desire to chase hits of. Although he's a Senator here, he barely reached double digits in game played. But, when one shows up in the box for a sane price, I had to go for it. 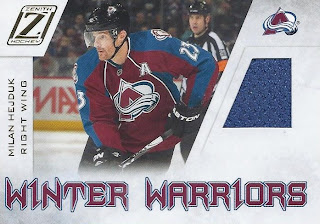 Milan is the leading scorer (for now) among 2/14 babies. Although I do think Marian Gaborik will pass him eventually. There is a two-sided relic with both these players on it that will end up high on my wantlist (when I reconstruct it). For now, this will suffice for his entry.

Up until now, my goalie mask binder has remained hit free. Heck, I've actually transferred out a /99 Olaf Kolzig card that I didn't realize was a numbered hit. So, it is yet to be determined where this Rask card will end up. Tuukka's mask is moving way up on my list of faves. It still hasn't knocked out the Mike Smith one, though. 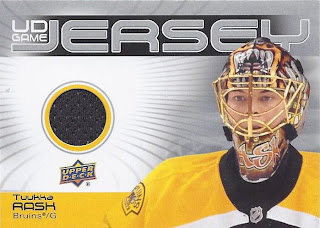 Posted by buckstorecards at 08:18