For today, I'll leave the dime box goodies behind, and move on to some relic cards I picked up. I actually prefer using the term jersey cards for them, because the relic term makes me think not of sports, but of The Beachcombers. That will change eventually. Anyhow, nothing too spectacular among these, but they all fit into my various collections. 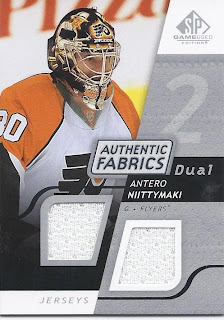 One for the Goalie Mask binder. I'd been keeping it pretty much free of relics and autograph cards, but this one was really too good to pass up. Niittymaki's "Frank Nitti" mask quickly became a fave of mine when he debuted it. Ken Hitchcock gave him the nickname Nitty, and it migrated over to his mask. When he moved on to the Sharks, Frank left, but the gangster motif remained as he added gangster sharks on the side. 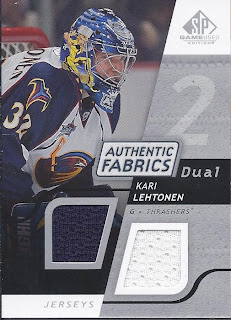 They were 2 for $5, so why not get a second one from the same set? I'm not a big fan of the movie, but how can one object to having Uma Thurman on the side of the mask? A nice photo of the mask, of which I've got a lot of in the binder, so picking this one to join Antero's was easy. 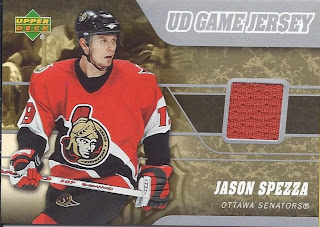 I've got way too many Spezza relics, and should have passed on this, but it was only $2. 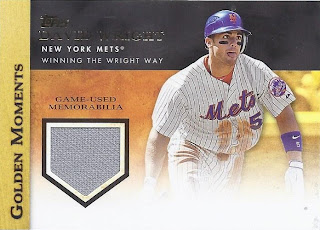 See the above sentence, but substitute in Wright for Spezza.