Since I've already had a pair of requests, I'll point out that unless I state otherwise, all the cards that I pull from this are available for trade. It's primarily base cards with inserts and parallels. The only ones I'm definitely keeping are goalies, guys for my birthday binder and Masterpieces. The latter of which we have yet to see in this break. Until now. 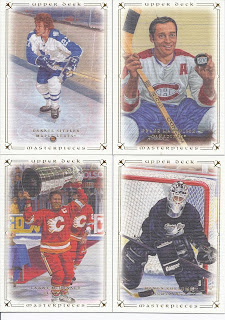 Seeing a pack of these in the box was a pleasant surprise. It's a set I've kinda considered building the base set of, since it is probably the only one I could see myself working on without getting POd at the lockout. It is a tough decision which is my favorite from it. It's nice to see Manon as part of the set, but it is really hard to vote against the Lanny McDonald. That's one of the most iconic examples of playoff facial hair. 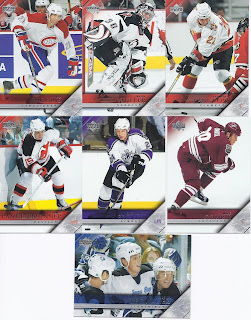 Upper Deck 05-06. I'm thinking this a preview of the photography we will see in the 13-14 sets, where they're forced to go deeper into archives for shots. The LeCavalier and Comrie ones are still nice. The latter is my favourite out of them, as everything really looks good with the sheet of ice as the background. 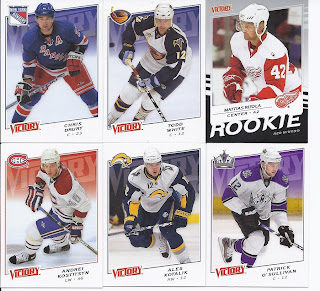 Nothing much to see in this pack. I guess Drury is the biggest star in this lackluster pack. 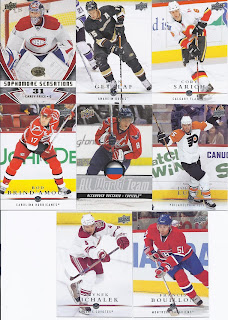 A couple nice inserts in this pack of 08-09 Upper Decks. The binder-bound Carey Price is my favourite, but I also really like the windup photograph on the Brind'Amour.

One more to go from the first box, and it features probably the closest think to a "hit" out of the bust sesson.

Posted by buckstorecards at 13:49