Today, you get the rest of the mailer! (kinda) 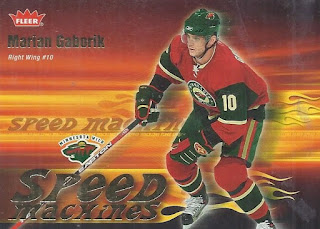 The only hockey card in the box was this insert of Marian Gaborik for the 2/14 collection. The design and subset name is a little cheesy, but I probably wouldn't have thought that if I was a much younger collector. 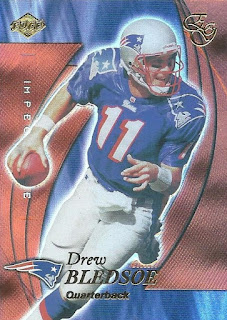 The rest of the package was football additions to the collection, and I'll be posting these in order of volume. Therefore, this Drew Bledsoe from Collector's Edge, numbered to 2000 starts us off. 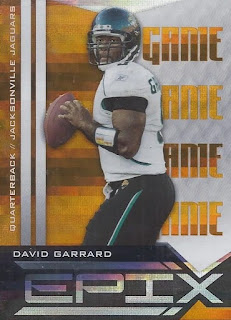 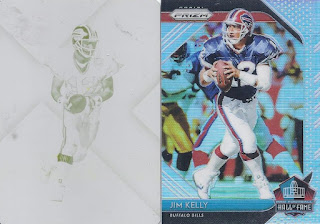 My first Jim Kelly 1/1 plate! WOO-HOO! And it contrasts completely and incredibly with the brightness of the Prizm card joining it. 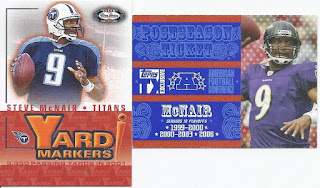 Given that pretty much everything else has shown up in relic form, including pylons and the padding from the field goal posts, I'm surprised that there aren't yard marker relic cards yet. The Ravens McNair card comes from a set called Topps TX Exclusive. It is /499. 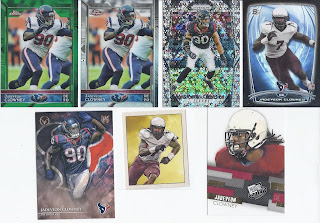 And here's your big winner in terms of volume, with more than the rest of the players combined, Jadeveon Clowney! The bright Prizm card in the top row is appropriately known as a disco parallel. I'd thought both the Valor and Bowman on the bottonm were dupes, but with the online move of the 2/14 collection to tradingcarddb, along with finally updating everything, I guess they weren't. 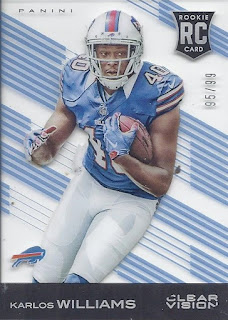 Finally, a few Bills cards to end it. Karlos preferred pharmaceuticals to a career in the NFL, and it pretty much ended after his rookie year. 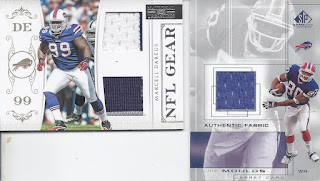 Dennis provided me with the opportunity to experience a packening of my own, shipping me 50 packs from the hockey version of the repack. So I've also got those to post. I'll probably start next week, interspersing my posts of that with Expo recap posts. That's if I even go. I'm just not feeling making a short trip over to Mississauga this weekend as much as I have in the past.

Either way, there you have it!
Posted by buckstorecards at 05:54