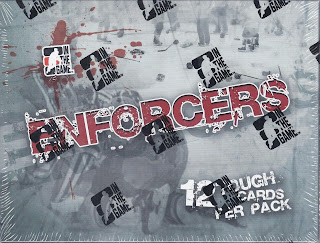 An always fun product will end this Expo recap. 12 cards (actually I got 13), saluting some of the craziest ever to play the game. 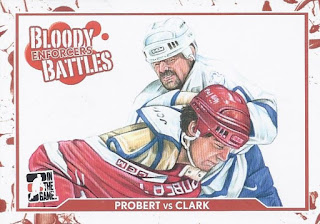 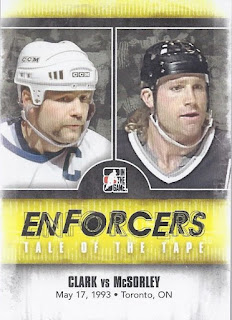 More Wendel Clark, this time they highlight a playoff encounter with Marty McSorley. 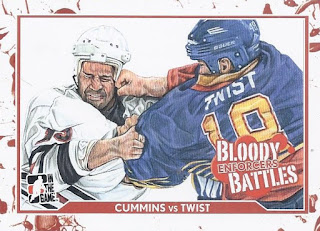 I'm sure Jim Cummins enjoys having this particular millisecond of his career immortalized on cardboard. But there it is. 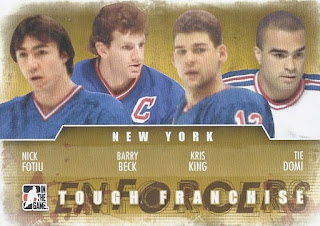 Tough Franchise is exactly what the subset advertises. 4 of the players you are likely to associate with the particular team. 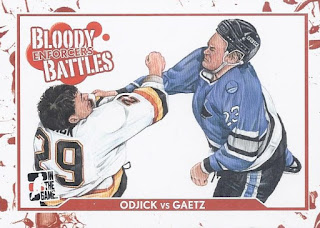 Any appearance of The Missing Link deserves highlighting. These two also appear in the Tale of the Tape subset, and they're a worthy pairing to highlight the 326 minutes worth of fun Gaetz caused during the Sharks first season. 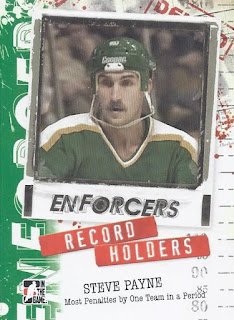 You can not feature everybody on the teams when they combine for 67 penalties (not minutes, individual penalties) during a single 20 minute period. But Steve's a great candidate for featuring on the card, having picked up 6 of them.

Time to start the hit parade. 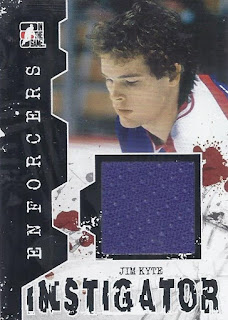 First up are the relics, and we start with a Winnipeg Jets swatch from the only legally deaf NHLer to date. It didn't stop him from spending 1342 minutes in NHL sin bins over almost 600 games. 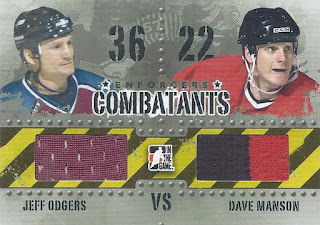 Dave Manson is a nice candidate for this set as well. This is my second card of his from the Combatants subset, joining one where he's paired with Joey Kocur. And both have two colour, red and black swatches.

And now, the autographs. I'm going to do this in increasing order of NHL PIM. 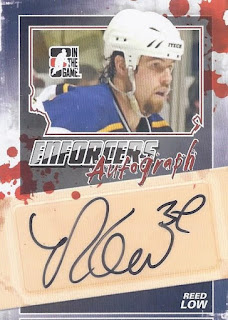 The checklist does cover quite a range of eras with this set, with Low's career being in the 00's, most of it with St. Louis. He spent a paltry 725 minutes in the penalty box, but did so over 256 games. 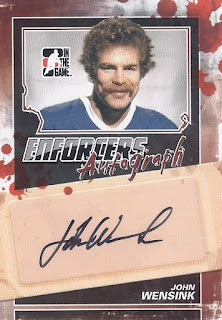 John's pictured here with the Nordiques, where he spent 1 season, and accumulated 152 of his 840 minutes of PIM. He can also be found on the Tough Franchises subset in this, albeit with Boston. 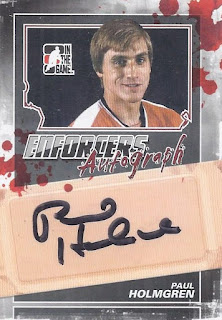 Paul didn't get the memo about extra fine sharpies. It is appropriate that the Broad Street Bullies make an appearance in this, even though Paul's career started as their glory days were drawing to a close behind the Habs 4 straight Cups. We are into 4 digits now, as Paul's NHL penalty totals were 1684 minutes, and you can throw in another 121 from his WHA time. 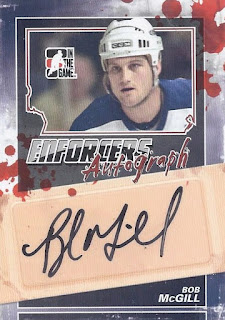 Bob is better remembered, cardboard wise, for his infamously cheesy 1991 UD card from his Sharks days. But he's a Leaf here, where he started his career with 263 PIM in his rookie season, finishing with 1766. He even got some zero-year (TM: Nick at Dime Boxes) when he was drafted by, and listed with, Tampa during the expansion draft, but never played for them. 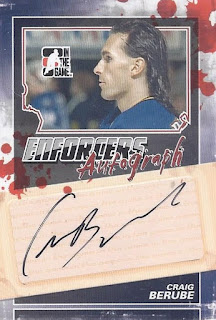 To end it, here's a top-ten PIM guy. 3149 minutes worth of crazy in just over 1050 games places him 7th all-time in that category. That's 3 minutes more than Tim Hunter. Tim surprisingly wasn't in this set, but he made several appearances in Enforcers II a couple years later. As for Craig, he's busy coaching the St. Louis Blues in their playoff run.

And that's the Expo. Starting tomorrow, I'll finally get to my packening.
Posted by buckstorecards at 08:25