Time for the Synergy box to draw to a close. 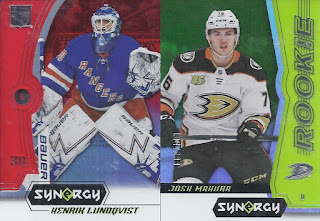 Only two cards in the pack? Wha... 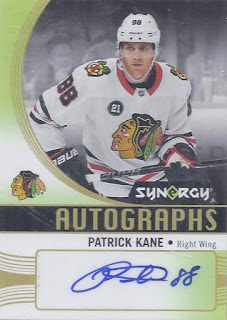 Oh. There's the third card. The autographs themselves appear every 3rd box, so I definitely beat the odds here. Even moreso, Patrick Kane is among Group A with the autographs, which fall 1:672 packs, or 1 in every 84 boxes. After hunting down a Kane autograph at a previous Expo for Jeff @ 2*3 heroes, it is nice to land a keeper this time!

And a McDavid in this one. 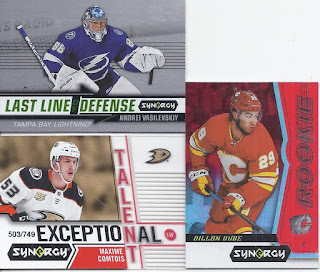 And a variety in terms of sets/subsets here with a base card and a pair of inserts. But, yes, this was all downhill from the Kane auto. And I'm fine with that from a lower end product. 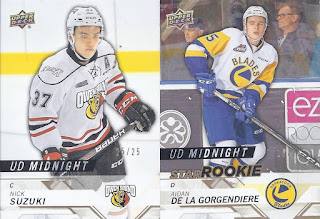 Suzuki was a first-round pick of the Golden Knights, but was sent to Montreal as part of the Max Pacioretty trade. 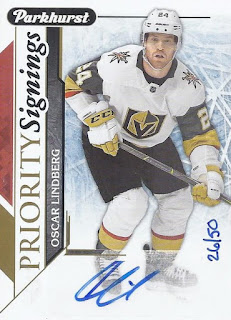 Speaking of being traded out Vegas, here's another one of those. Although he's pictured with the Knights here. Oscar went to the Sens as part of the Mark Stone trade, so I guess this is sorta a Sens hit.

Still, three autographs resulting from a box break of a product that didn't guarantee any is pretty good, especially two major names. I grabbed two more boxes at the Expo, but I'll spread them out over the recap. Next up, 2-14 goodies!
Posted by buckstorecards at 08:10