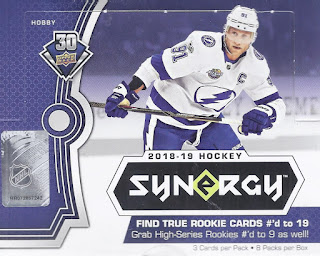 For the next little while (maybe with an interlude here or there), I'll be recapping some of the goodies acquired this past Friday at the big show. First up, here's a box of Synergy. It came with 2 UD bonus packs, so why not? There's no guaranteed hits in the box, but there's colourful acetate, and at least 1 numbered card per pack.

Even if it is hidden by the design, that's still a nice appearance of Stanley on the cards. I picked this up from the Clouts&Chara booth, and since their group breaks of this year's products pretty much guarantee an appearance of Jordan Greenway, I shouldn't have been surprised to pull a card of his. 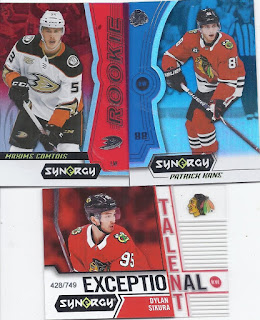 Blackhawks hot pack! Red are the most common of the cards, followed by the blue. The rest of the cards are all numbered. While I generally like cards where the colour(s) match the uniform, it might have been a little too much on that Kane. I'll end with the lowest numbered Synergy card in this post. While it is a nice looking Bobby Orr at first glance, you can see it is slightly miscut into a rhomboid shape. Rhombus is not an official parallel in the set, so perhaps I should have looked more closely at the show to see if I could get it replaced at the UD booth.

Since I have two bonus packs, I'll do one each. 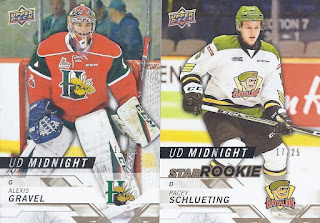 There's two midnight parallels in each pack from the recent CHL release, all of which are /25 (no 12/25s though - sorry Gavin). Schlueting just finished his rookie season in North Bay, while Gravel went to Chicago during the 6th round. 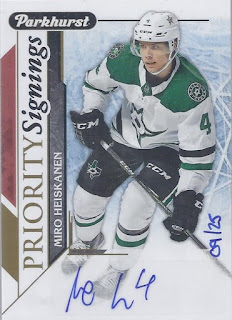 And hey! That's an auto. A pretty good rookie as well! This one didn't stay too long in my possession, as it left for some Sens content (which will show up in a future post). Again though, not a 12/25 card.

But there you have it!
Posted by buckstorecards at 05:52