After returning from the Expo, I posted to twitter an account of some of the goodies I pulled at the show from the boxes. Namely, all of the goodies from the box of Synergy. I was contacted by @GridironMast, a Miro Heiskanen super-collector, and it worked out for me to swap that for some additions to my Sens collection. 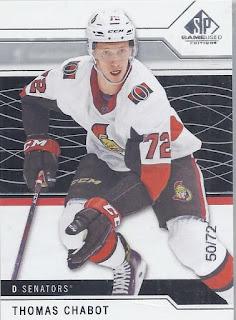 The oddness of SP Game Used means that this card is a base card in the set, being numbered to the player's jersey number. In a post Karlsson world, he took the opportunity to shine and ran with it. His rise was among the few highlights of the season. 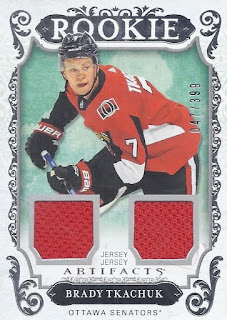 Another highlight was Brady Tkachuk showing that he was worth hanging on to the first pick in the previous draft versus this upcoming draft, although that might not have been the case had the draft lottery worked out differently. Here's his first appearance - a pair of (redemption) relics out of Artifacts. 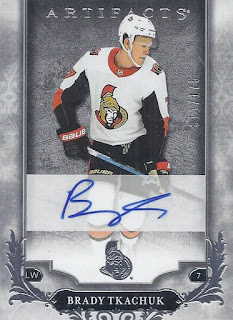 Staying with Artifacts, here's his second appearance, and my second autograph overall of his.

Thanks  for the hook-up, GM, and my first trade on the ol' twitter machine. A more traditional, for me, blogger package is up next.
Posted by buckstorecards at 05:24