2019 Score dropped yesterday, starting off the NFL collecting season. I'd cashed in $250 of COMC credit, with the intention of picking up a box, and something else to go with it. Since this product was marked down significantly for blowout's April Showers sale, I decided to buy my first ever NT box. To chase some Jamal Murray, I went for 2016-17 Collegiate basketball. 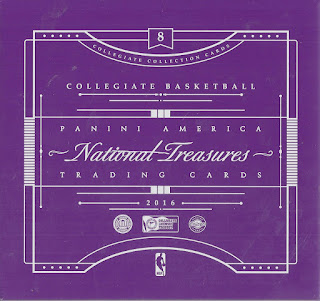 Even the box looks high end. There is a cardboard overlay for a hinged box, with a smaller box contained within. Although this advertises 8 cards, there were 10 inside, 8 of which were hits. 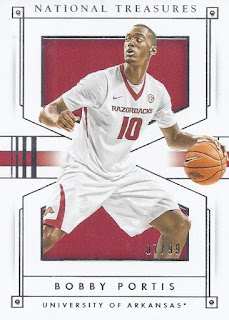 Here's the base design. 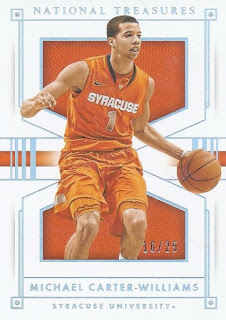 And here's a silver parallel. With the white getting constricted around the middle of the card, it works better here with the dark vs the light jerseys. 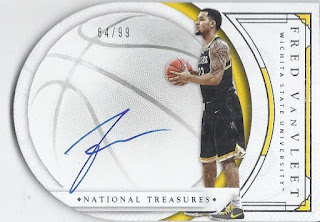 Here's the first hit, and I'm already happy. Of course, this counts as a Raptors card. This is my second FVV auto, both of which are technically Shockers autos. 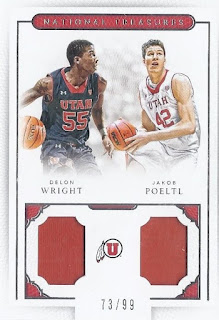 2 for 2 with Raptors binder additions! 2 college teammates that got drafted by the same NBA team, albeit a year apart. 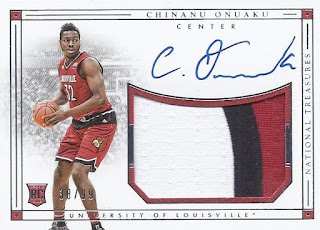 I've already got a Onuaku card from Spectra where the photo features him taking a free-throw shot granny style. Although this has a patch and an on-card auto, I still have to give the nod to the Spectra. These are considered to be base cards in this set. 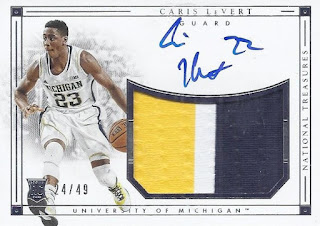 I didn't get a Jamal Murray in this box. But I did get this Michigan Wolverines patch and auto that will surely wing its way in the direction of Ann Arbor. If you don't get a PC hit, you might as well hit one that a regular trading partner will appreciate. 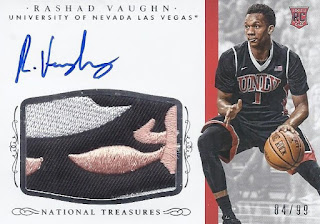 How can this patch be numbered as high as /99? It must come from a cap or warm up jersey, because this feels more like a hockey patch. This card actually came from a 2015 Multisport release. Looking for other examples on COMC provide no clue. 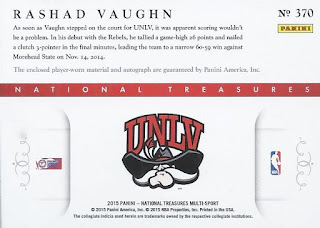 But by looking at the card back, I can at least place the relic as part of the Rebel's mustache and nose. 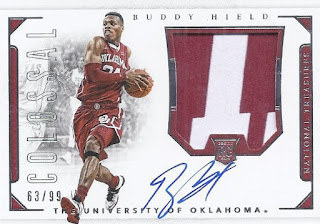 One more on-card autograph with a patch to end this portion of the box.  This swatch doesn't seem significantly larger than the others with on-card autos, so I'm not sure colossal is the term I'd use here. 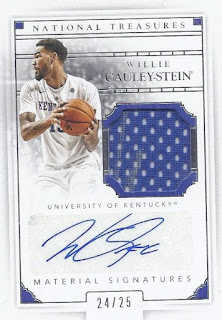 The only sticker autograph of the box. It is a second year player, so I guess this counts as the veteran content in the box, along with the MCW. 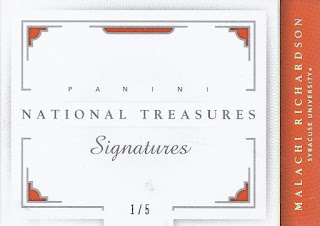 The final card in the box is literature, in the form of a book card.

For my first time busting one of the higher end options out there, I really can't complain. Hits for the PC, hits for trade partners, and some nice swatches. I go lower end tomorrow as I start recapping the Score box.
Posted by buckstorecards at 20:30