Nothing is going to compare with the box I posted over the weekend, but here's a whole bunch of Sens acquisitions. With the exception of the new AHL cards, all came, once again, from the 5 for $1 bin. 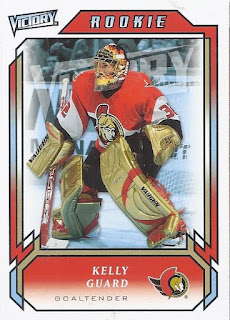 With a name like this, goaltender seems like a position you're just destined to play. Kelly's time as a Senator was limited to back-up time on the roster, with no ice time. But he still got cards out of the deal. 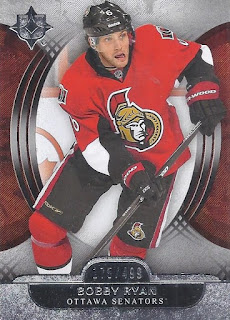 A numbered card for 20 cents? Sure thing! 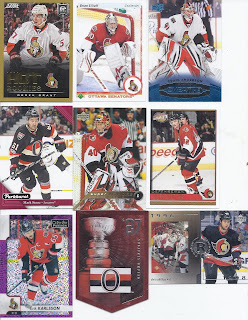 You want some miscellany before you get to the players I acquired multiple cards of. Here you are? Any appearance of Lalime's Marvin the Martian themed mask definitely deserves to be right in the middle. 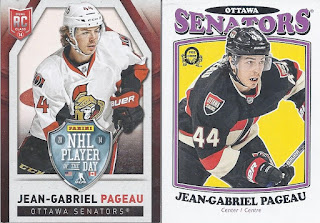 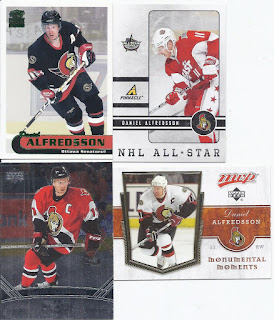 I'd already shown off Jack Rodewald's card from this set in the 2/14 recap portion. Here's a few more. Leier has a background that one doesn't see much in pro-level cards - time spent in the Canadian university system. He spent 4 seasons out east for Acadia. Balcers came to the Sens as part of the Karlsson trade. He spent time with the big club this season, and should have cards at that level shortly. Gustavsson does have 'Goalie of the Future' potential and was the best goaltender at 2018 World Juniors. In other words, he'll disappoint me later rather than sooner. 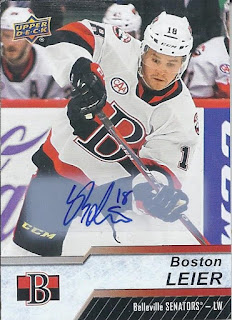 And why not throw an autograph in as well? I have to get at least one Sens hit out of the show, right?

Up next, the baseball!
Posted by buckstorecards at 05:01