It has been almost a month (4/23), since I've done a repack post. Time to remedy that. Dennis, @ Too Many Verlanders/Manninghams, knows of my love for repacks. So, the most recent mailer included the contents of one of those 50 pack repacks. The hockey version, naturally. So, I was able to bust a bunch of packs, and throw the wrappers around like Scrooge McDuck.

These were the packs contained within:

That's 58, enough more than 50 that it is noticeable. I'll break this up into 4 posts, and I'll start with the first 4 in the list. 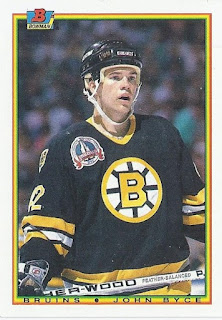 1990 Bowman is the patron saint set of repacks. It is rare to find a repack that doesn't include at least one card from this set. So, I should show at least one. Here's a player I'd never heard of before, but at least it includes a nice look at the Stanley Cup finals patch. 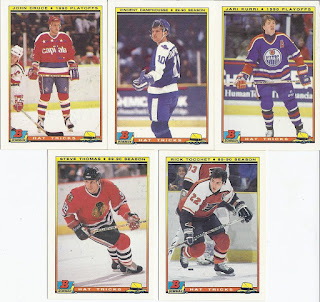 Each of these packs included a Hat Trick insert, along with the obligatory stick of gum. You're less likely to find the inserts in repack, so I'll highlight all of them. Because why not? As for the gum, I was scheduled for a root canal the next day. So that's why I didn't try it. That's the ticket. A root canal. 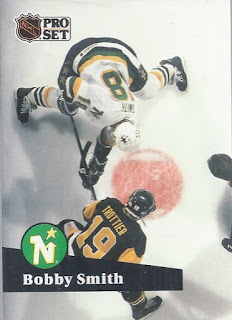 Pro Set 1991 was another candidate for the dullest sets in history. With a couple exceptions, such as this, all the photos were taken at ice level with the camera seemingly parallel to the ice surface. Throw in a lack of colour, especially compared to the previous year, and you've got a snoozer. 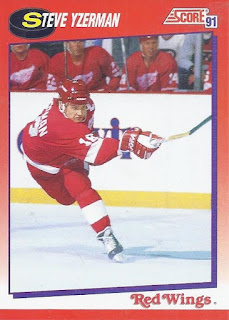 Too much red for this? OK, so there might be a little too much, but it does work here with a nice photo, as Yzerman contrasts with the white boards. This would actually work really nice with a horizontal layout. 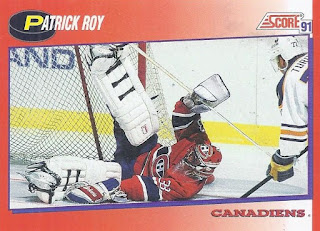 Such as here. This sprawling save would look far less impressive on a modern card with the far larger pads. 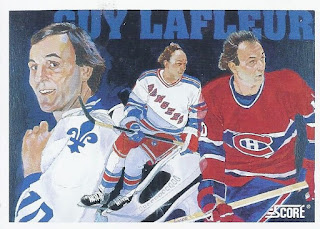 Throw in a drawn card of the retiring Guy LaFleur, and 1991 Score easily wins the junk wax battle.

And since I really can't showcase just these cards, I'll fast forward a few years to 1996 with Mint. Each pack includes 3 items:

A card with a hole in it. Alfie!

And a coin that can be matched up with its respective holed card.

There you have it! 1997 goodies tomorrow!
Posted by buckstorecards at 06:47