If you read Dennis' posts over at Too Many Verlanders/Manninghams, he picked up a few 50 packs for 20 dollars baseball repacks through walmart.com. He then busted the lot of them. I received some of them as part of my most recent mailer from him, hitting a bunch of my PCs. Time to check out some of them! 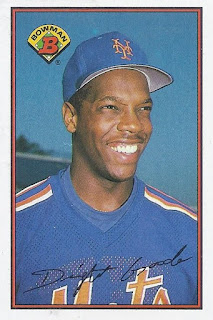 I guess this was literally the biggest card in the bunch. 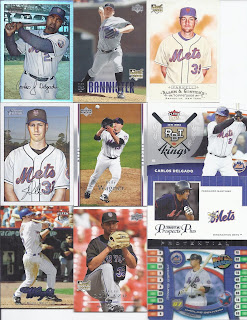 The majority of the cards in there were Mets and Jays, so I'm going to limit these teams' representation to one scanner bed each. While the shiny Delgado is a highlight, my fave here might be that Willie Collazo, since he fell under the category of guys I had absolutely no memory of with the team. He made 6 appearances with the team, and finished with an ERA over 6. But that's still 6 more than me. 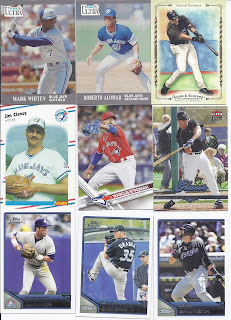 Here's the Jays content highlights. I'm somewhat surprised i didn't have that card of Stroman rocking the patriotic jersey, or any of the Lineage cards. 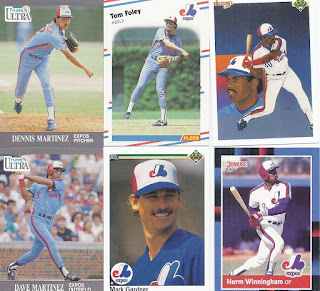 There really wasn't as many junk wax era packs as you'd expect in this. So the Expos content was scant, but still added a few cards to the binder. And you have to love any appearance of the Wrigley ivy on cards. 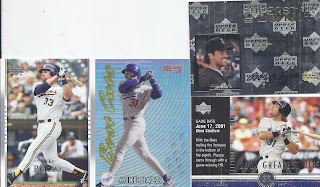 Some player collections also got hit. That shiny Bowman looks to be from Bowman's Best, so I might have gotten a non-packening card mixed in with the others. Oopsie. Still shiny, though! 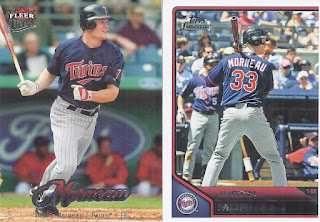 Cancon! Boy, that lineage is sure a spring training photo. 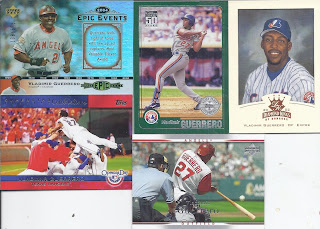 And let's end this part of the boxes on cards of a guy who spent the weekend in Toronto catching his son's major league debut. The 2001 one is actually a Cards Mom Threw Out reprint.

And there you have it! I'll have some non-packening stuff from the boxes tomorrow.
Posted by buckstorecards at 08:10