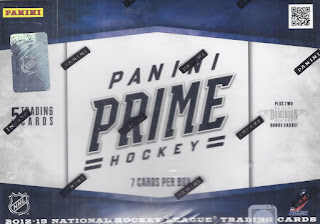 The best boxes of cards are free ones! I could have gone for quantity over quality and busted some new Platinum hockey, or some Bowman baseball, but opted for a couple Prime boxes. With the half-season in 12-13, releases were cut back, and this was the highest end Panini release. 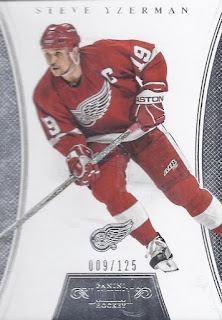 Dominion was another high end brand from Panini hockey, and they included a couple cards from it in a separate pack. This was the base design for the season, with the foil colour changing for lower-numbered parallels. 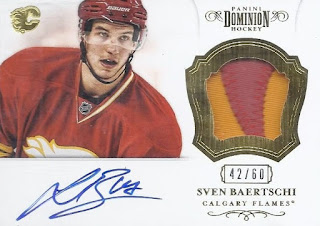 The Dominion packs consisted of one base card and a hit. A pretty nice patch on this one, obviously from the chest logo. While I usually prefer the team patch in the same direction on the card as the logo, it works here as it creates a slight flickering effect. Baertschi is still in the league, having just wrapped up an injury-shortened season in Vancouver.

Note this card is out of 60. That's the highest numbered hit in this box. 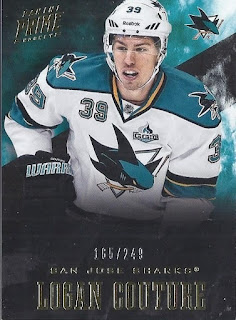 I'll go through the rest in reverse order of print run. Here's the other base card in the box. While I always prefer the original photo's background to having it wiped, at least there are team colours here. 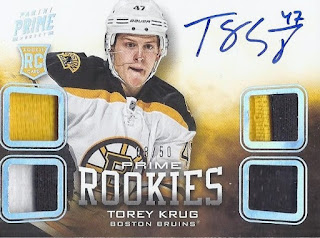 The regular versions of these auto/relics are /249, these holo silver parallels are instead /50. You've got a couple nice prime pieces from seams to go along with the standard pieces, and only a single one-colour swatch. 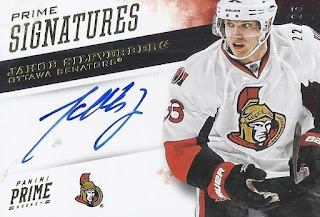 The autograph portion of this box ends with this /25 gold parallel for my Senators collection. The Sens had a pair of rookies in this release, and while Mark Stone is the one you want to see, Jakob is still in the league. In fact, all 3 rookies with autos so far are still in the league, which is pretty rare from a rather unimpressive 2012 rookie class in hockey cards. 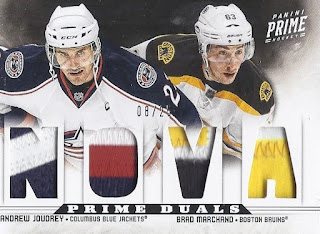 Joudrey is the only one of the rookies in this box that wasn't playing in the NHL last season. But he's paired with a fellow Nova Scotian here along with a quartet of nice patches. 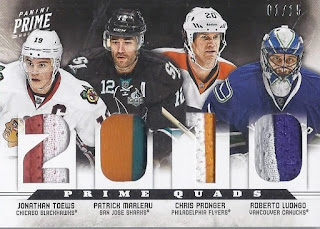 And the lowest numbered card in the box was this very patriotic beauty. The window gives a hint as to the connection between these players - all 4 were members of the 2010 Olympic gold medal winners. The seam on the Luongo is so thick it is almost busting through the card.

That was a really good box of cards from a rather tough year for rookies. I'll be showing off the 13-14 version tomorrow. Note that the quad relic is limited to 15 copies - tomorrow's box will have 2 cards numbered to even fewer than that.
Posted by buckstorecards at 01:57