Yeah. I kinda forgot about this. Several times, mind you. I'd put the last team bag of cards to the side, consisting of miscellaneous hockey from the 90s forward, thinking I'd get to them 'tomorrow'. That eventually morphed into "Here's a team bag of cards. I don't think I've posted them yet. Where did they come from? Oh yeah..."

So, this is the final bunch of hockey out of Wes' Grand Finale this past January. Only a month and a half after Part 4 went up. Efficiency! 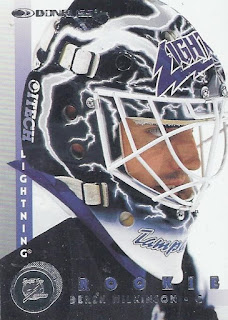 A mask binder card to start this off. This card, and a couple parallels, were the extent of Wilkinson's NHL card career. At least it was pretty memorable. 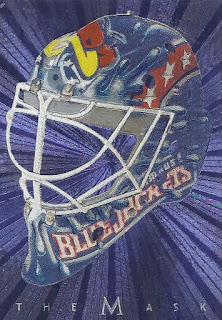 These were chase inserts back in the day with ITG releases. Or at least the Congratulations spiel on the back made it seem that way. You do have to flip the card over to realize that this is a Ron Tugnutt card. 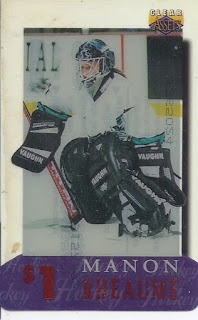 A mask binder card for the distaff side of things. I wonder if I can still make $1 worth of a phone call with this. 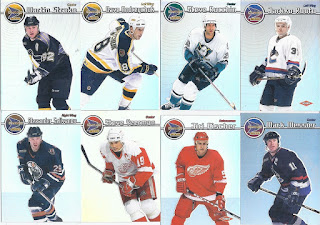 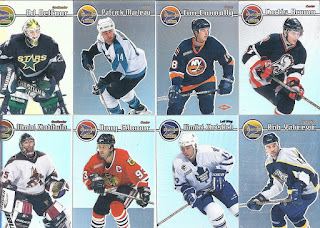 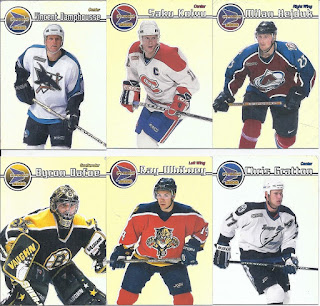 The majority of the miscellany was taken up with this bunch of 1999 Prizm cards. There's a bunch of runs I'd completely forgotten about in this mix, such as Andreychuk in Boston, Khristich in Toronto and Damphousse in San Jose. But the big highlight was the Milan Hejduk, with a card I was surprised I didn't have in the 2/14 collection. I did have the numbered holographic gold parallel /480. 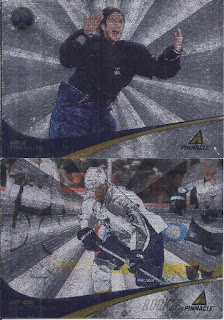 More shininess, with a pair of Rink Collection/Dufex parallels from Pinnacle. 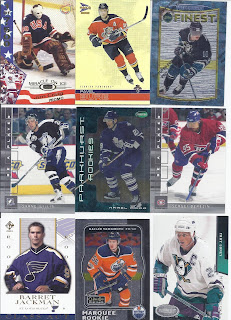 A bunch of miscellany before I get to the numbered cards/hits. 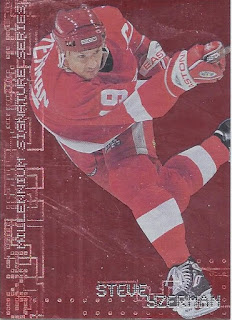 Cards where the team colours match those of the parallel are always welcome. This ruby parallel is /1000. 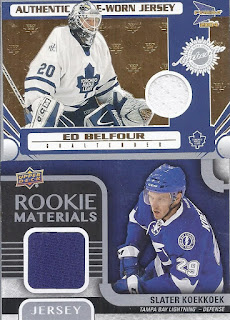 Belfour spent three season in Toronto, but it still felt like a brief stop. Koekkoek was always a fun name to say out loud. 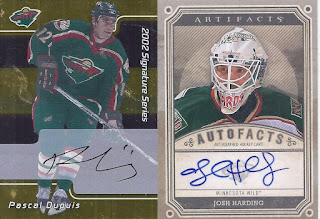 Finally, ending on a pair of Minnesota Wild autographs. Although it isn't the one pictured here, Josh Harding had one of my favourite mask paint jobs. When the team bus and some of the equipment was destroyed by a fire, he put the burning bus, the fire truck and the Ottawa fire department logo on the mask.

Thanks so much to Wes for all the goodies, both this and with other trades over the year, and for thinking of your fellow collectors on your final pack busting escapade!
Posted by buckstorecards at 11:27