I grabbed the Senators in a second Monster break this past weekend, and added a decent variety of cards to the collection. While I didn't do as well as
the last time, I still added a few nice ones, and perhaps there will be a nice bonus or 3... 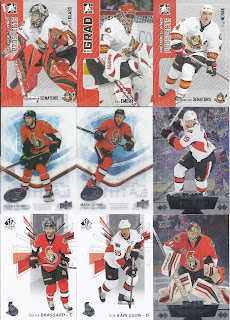 Here's a sampling of some of the base cards. I really like getting AHL cards, especially if they're of people I don't have many cards of in the collection. Filip Novak and Jeff Glass (awful name for the back of a goalie's jersey) qualify here. Glass didn't make his NHL debut until the 17-18 season with Chicago. For perspective, his card here is from a 05-06 release. 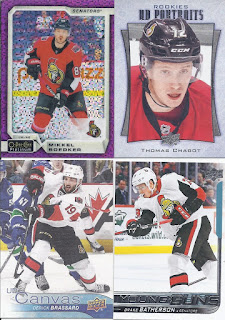 Here's a handful of non-numbered cards that are inserts, parallels or SPs. That's the first appearance of this year's platinum release on this blog. He can also fit into my collections as a Kitchener Rangers alum. 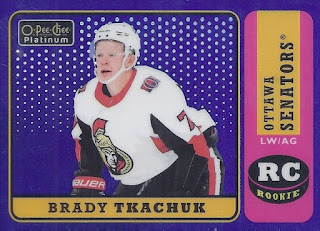 And these are a teaser of what the retros look like this year. With the ariety of colour, the backgrounds are a little more subdued here. 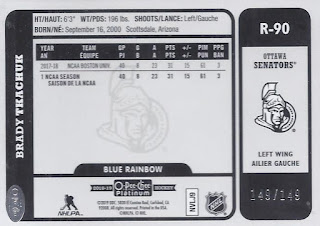 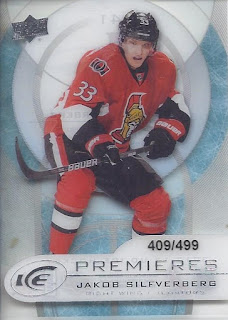 Not an ebay 1/1. Ice didn't get a release in 12/13, so all they had was a single pack inserted into Black Diamond. I did get the only numbered card in the pack with this Silfverberg. 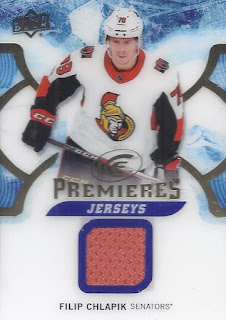 Another card of a guy named Filip. 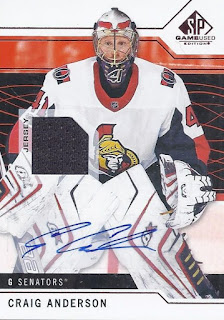 That's more like it. I do have quite a bit of Anderson ink and/or relics in the PC, but the more the merrier! 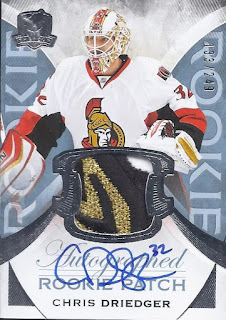 It may not be of a big name, but I won't complain about any RPA for the collection. Especially when the patch includes some gold on it. Dreidger saw action in 1 NHL game over 3 straight seasons, and remained in the minors since then, most recently in the Panthers organization.

There is also a random draw for store credit as part of this, and this week, I won it! I opted for a box of 12-13 Panini Prime and one of 13-14 Prime as well. I'll get to those over the weekend. But I also got this: 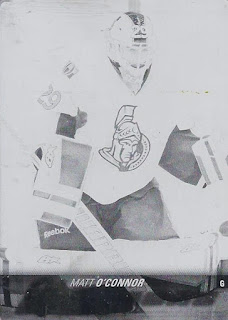 And there you have it! Get ready for some Prime Time this weekend, and a pair of really great boxes.
Posted by buckstorecards at 06:01