Today's mailbag post is of cards from the companies themselves. 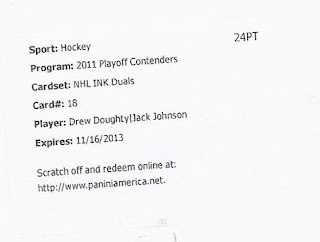 Only one card in the Panini mailer, but it is an example of how they still are willing to do something with expired redemptions, even if they are a couple years removed from making hockey cards. 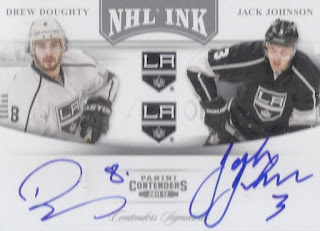 But in this case, there was no need to get it replaced, since the actual card was available. While Drew is the better of the players, Jack easily wins the penmanship battle. I'm keeping this one, but a certain collector of Michigan Wolverines alum shouldn't be too surprised if a different auto ends up in the next mailer.

With the second mailer, the # of outstanding rookie redemptions from this year's Artifacts release reaches zero. 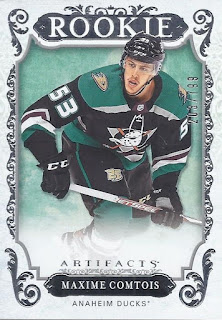 Even with a couple Sens cards in the mix, and a big name rookie, my favourite of the 6 might be this card, if for nothing else than the alternate uniform and the classic logo. 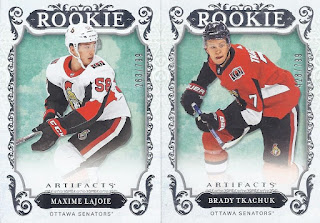 Here are the two Sens cards. The rookie redemption portion of the set has 9 'wild cards', which were non-team specific at set release, but then got filled with #2 and #3 rookies on teams that had more than one candidate. Ottawa got two of those (as did Anaheim) with Lajoie and Batherson. Brady was the main rookie, and I got all 3 through group breaks.

Warren Foegele was another one of the wild cards. But Svechnikov was one of the main rookies in the set, since he also got relics and autographs as mystery redemptions. The card in the middle is one of the emerald /99 parallels, with the dual relic being one of the Roman numeral redemptions.

And there you have it!
Posted by buckstorecards at 07:35