You should know what that title means - an envelope from Dennis @ Too Many Verlanders/Manninghams packed full of 2/14 goodies. 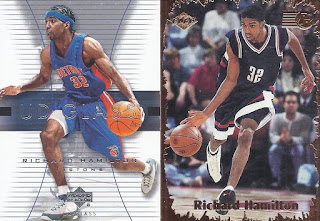 The volume in this package went for the football side, but there were a handful for other sections in the binder. Richard Hamilton gets his 60th and 61st card with these two. 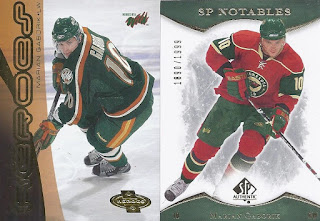 After all the Hejduk cards yesterday, Marian Gaborik needs to start working his way back to take the lead in the hockey portion. He's now 16 cards behind Hejduk with 167. 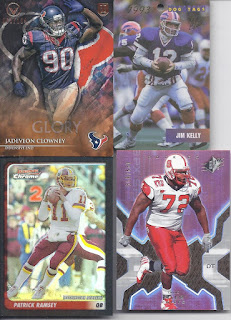 These four get grouped together because they were the only cards of these players in the envelope. While my favourite should be that Jim Kelly dog tag/card, I always love when the design includes the team's logo in the background. So, Clowney wins this one.

3 cards of a guy who has thrown as many NFL game passes as I have. Looking at the Jets depth chart, he's probably holding a lot of clipboard in 2018. 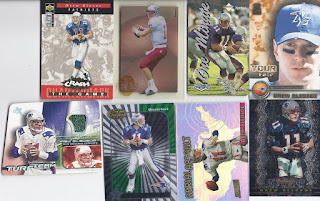 New Bledsoes are highlighted by a hit that includes a piece of Veterans Stadium turf. I'd picked up one of those before to add to my collection of hits, but that featured Ron Dayne. I didn't realize there was a 2/14 binder guy among that subset. These 8 cards put Drew Bledsoe at the 76 card plateau in the collection. That's good for third place, 5 behind Jim Kelly. 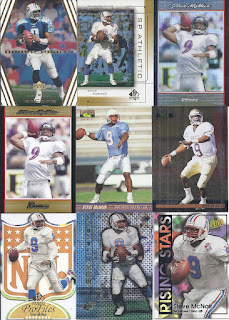 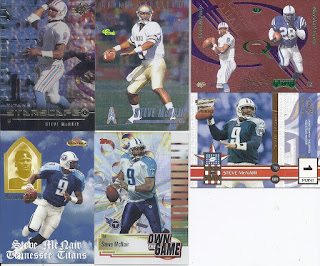 Because all these Steve McNair cards pushed him into the lead in the football portion with 91 total cards. That's the second lead switch in two days. I'm not sure if Ravens cards count as oddballs for him, but they always seem that way. The acetate NFL shield card is also /100. The quads horizontal card also has a leathery pigskin feel to it.

And there you have it! There's more non-2/14 cards that I'll get to in a later post. Dennis should keep his eyes on the mailbox, as I've dropped a pre-Expo mailer in that direction!
Posted by buckstorecards at 07:15