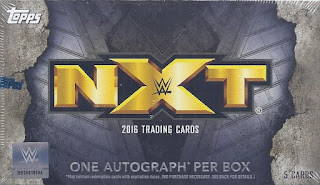 I decided to try one of these mini-boxes on the cheap. NXT can sorta be described as the minor league affiliate of the WWE, mainly because I really can't think of a more appropriate analogy.

The pack had 3 base cards, a mix of those who started their WWE careers in NXT, and those who had yet to make their debut on the main shows. NWJ has conga lined himself to Monday Night Raw, so he might be a future Called Up card. 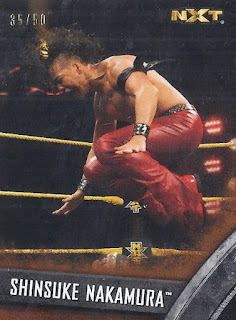 I'm not sure if the parallels are 1 per mini-box, but I also landed this bronze parallel of the equally charismatic and talented Nakamura. 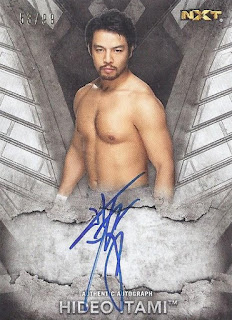 Maybe this box should have been sent to Japan as opposed to Ontario, as both of the big cards in the box would fit nicely into the collection of a collector across the Pacific. For as successful as Nakamura has been, Itami hasn't come close to that level, as the injury bug took bites from him. But, he has been seen on the cruiserweight themed 205 Live lately, so it isn't a total wash.

There you have it!
Posted by buckstorecards at 08:06