As I continue to get caught up with the incoming cards, it is time to recap my latest Buffalo Bills additions to the PC. These are all from group breaks, and I'm hitting on three breaks in one post. 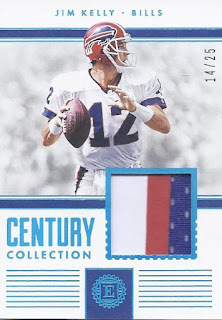 First up, a case of Encased. While I didn't add any autos to the collection, the swatch portion of the collection increased. Jim Kelly cards tend to migrate to the 2/14 collection and away from the Bills collection, and this one is no different. 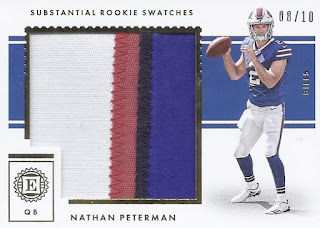 This swatch is certainly substantial, as Peterman looks to throw the ball straight into the numbers of a defender. 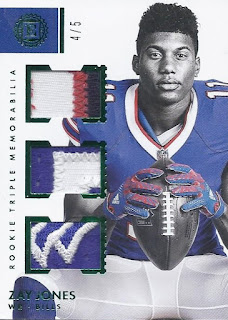 There's my first Buffalo legs patch, even though Zay might want to keep any garment that covers his body for future use.

Off to a mixer now, starting with a trio of cards from '15 Prizm. Cyrus is numbered to /99. I'm really surprised I didn't have that Bruce Smith card already.

Some more recent stuff is seen here in this year's Select release. That's my first Kelvin Benjamin Bills card, and this Tri-Colour Concourse parallel is /199. 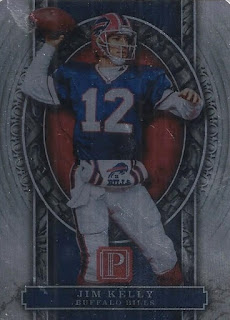 Only the box of Pantheon yielded me any other cards in the break, but this one might be my favourite of this whole post. This card isn't just a chrome card, it is actual metal. And it is also considered part of the base set. 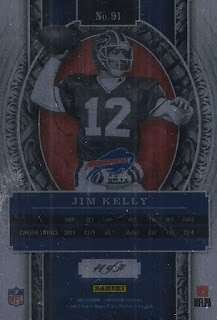 Even the card numbering scheme 44/50, has a classier feel to it. Likely because stamping the numbering on the card probably wouldn't work. 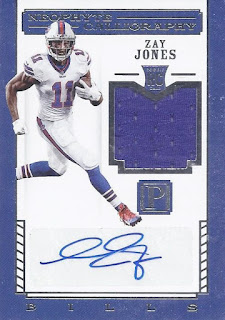 More Zay, this time with an autograph to go alongside a legless swatch. 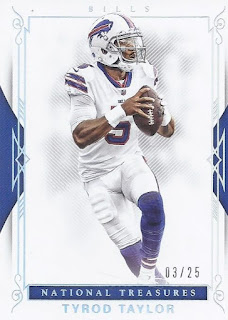 Finally, let's get really upscale with some National Treasures. I generally don't like the white backgrounds, but there are some team colours to go alongside the photo. This is the holo-silver parallel. Tyrod really deserved better than the Bills gave him this season. Thanks for leading us to our first playoff birth since Clinton was in office! Enjoy Cleveland! 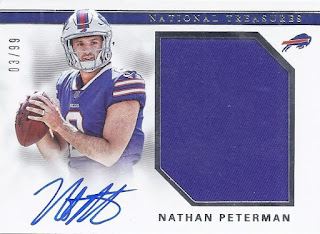 Ending on another occasion of an autograph joining a swatch, here's Peterman again. I'm going to have try to talk myself into AJ McCarron by September, aren't I?

Back to repacks tomorrow!
Posted by buckstorecards at 06:29