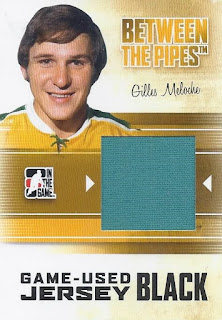 Usually I work my way down to the hits. Today, I'm leading with one. Why? This is a California Golden Seals relic. There are not many of these available. The only ones I could find are also of Gilles Meloche, all of which were in Between the Pipes releases. Despite some really great pulls in the Zenith and Champ's breaks, this might be my favourite from all of them. 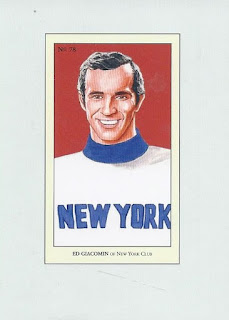 Back to the inserts, and one that went through several 2010 ITG releases. This is part of the '100 Years of Collecting' set. Obviously, the goaltender portion of this ended up in BTP. 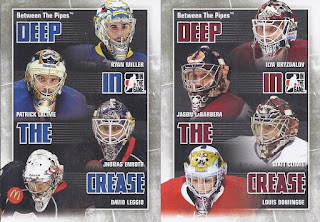 Here's another two Deep in the Crease inserts. Of these 8 players, only Leggio never played a game in the NHL. But he did get a rule named after him. 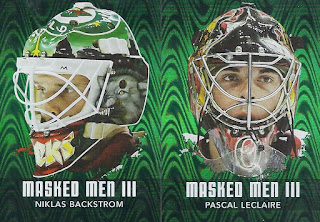 The Masked Men insert did get me my only Sens insert card from the two boxes. 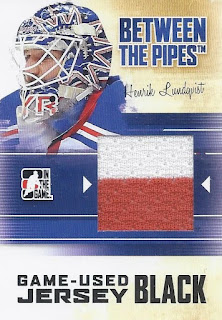 And back to the hits. The black GUJ cards are the base of the bunch, but at least this is still a two-colour swatch. And red is always notable on a Rangers swatch. 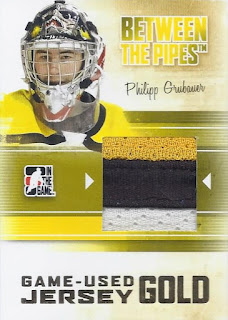 The gold versions of the GUJ cards are limited to 10. This thick swatch definitely feels worthy of a card numbered to 10. This swatch is from an OHL Kingston Frontenacs jersey. Grubauer has been starting for the Washington Capitals on this playoff run. I'm writing this on Sunday, so maybe he'll have backstopped the Capitals to one of their frequent one-and-done runs. 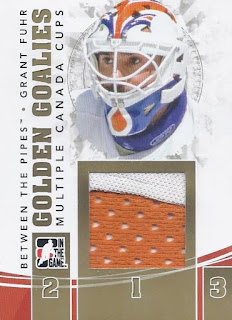 More Gold! And it is a two-colour Hall of Famer swatch! Beautiful! Much like with red and a Rangers swatch, orange is always a nice rarity on an Oilers swatch. 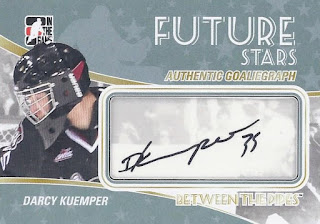 My first auto. At least he's still in the league. I doubt I could have told you he's with the Coyotes now, though. 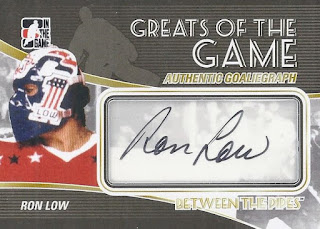 My other auto also falls into the Washington Capitals category, this time stretching back to the first year of the team's existence and a team that regularly tops lists of the worst NHL team ever. 21 points over a season off of a miserable 8-67-5 record will do that. But the signature is legible, and Low would hang around until the mid 80s in the NHL.

And there you have it!
Posted by buckstorecards at 05:01