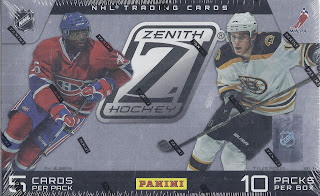 I also picked up some misc. boxes to break alongside the Champ's. There were a pair of boxes of 2010 Zenith sent my way as well. As well as a pair of Between the Pipes boxes also from 2010. I'll start with the Zenith, and then take a break from hobby boxes for some posts before getting into the BTP. 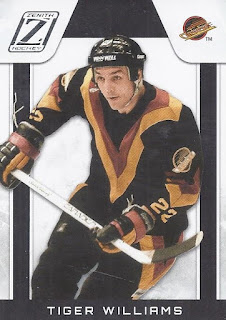 These are the base cards. If you pull a card with a Flying V jersey on it, it is always a good choice to show that one off. 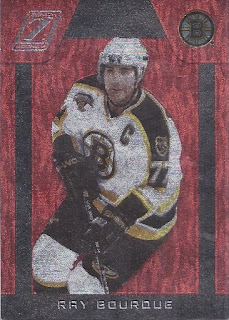 There's one base parallel per box, and in this box, it was this Red Hot featuring Ray Bourque. There are some oddball team choices in the veterans portion of the set (Cam Neely as a Canuck, Ed Belfour on the Sharks), so I'm surprised he's not with Colorado on this card. 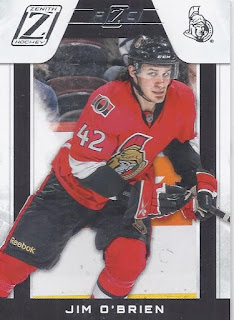 There's usually one rookie base card /999 in a box as well. At least I hit a Sens card! 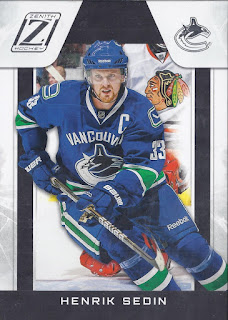 Each box comes with a "Dare to Tear" jumbo card. It has a card inside the back of it, much like Ginter rip cards. Do you rip it open or keep the box topper as is? 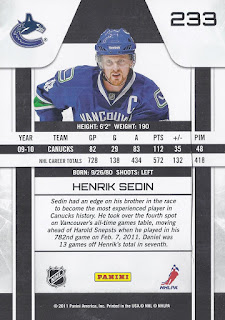 Or do you gently cut it with an exacto knife, and slide the card out? I chose that option, and still have a pretty nice jumbo card (You can see the cut just to the left of the PIM stat. 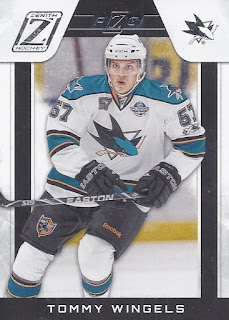 And I land a rookie /199 of someone still in the league! He had a half-season with Ottawa last season, signed with Chicago, and was traded to Boston at the trade deadline. 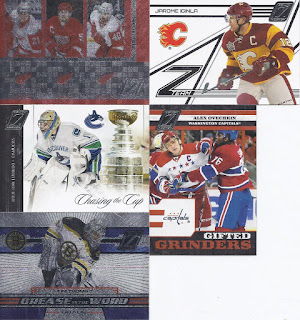 The inserts. Mozaics move over from other non-hockey Zenith releases, as does Z Team. That insert the big winner here, with Iginla rocking the Heritage Classic jerseys. 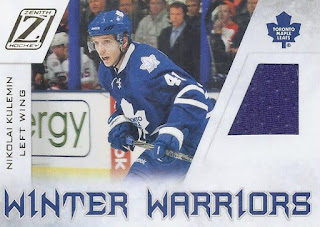 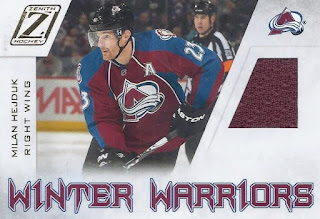 I'd be happy to add a new Milan Hejduk to my 2/14 collection, but this one is a dupe. Winter Warriors is probably the most common of the Zenith inserts. 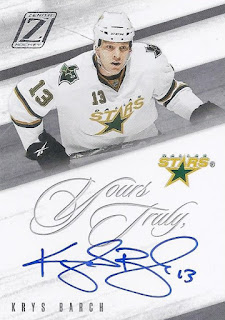 Finally, the auto. It is on-card, and does look pretty nice with the design. Barch is retired and now works in the Buffalo organization, but he did have an eight-year career in the NHL, and doesn't have too many autos on the market. Glass half full!

One box of Zenith down, one more to go!
Posted by buckstorecards at 09:48