Time to show off some Ottawa Senators cards. Some are from COMC, some are from a Too Many Verlanders/Manninghams mailer. 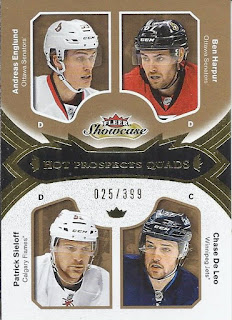 This was an efficient addition to my Sens collection, as it knocked two players off my "every Senator ever" list with one card. Ben Harpur has made an appearance in SP Game Used with a solo card, but this does appear to be Englund's first card appearance. Technically, Sieloff should be a Senator as well, as he came over last summer in the Chiasson trade with Calgary, and was a Senator (in Binghamton, mind you) for long enough after this was issued to call him a Sen. So, 3 birds with one stone? 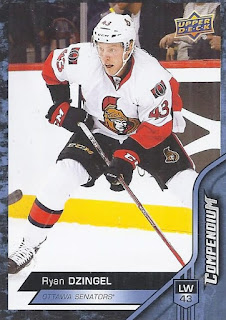 Ryan Dzingel also made his debut on a Showcase card, but did so in 14-15. He settled into a permanent spot last season (great for a 7th rounder) and got a solo card out of the e-pack of Compendium. 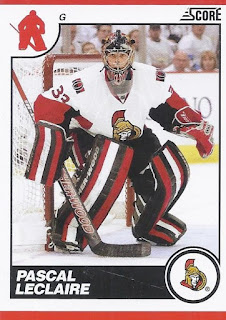 A real nice look at Pascal LeClair, and the excellent colour co-ordination with his pads. 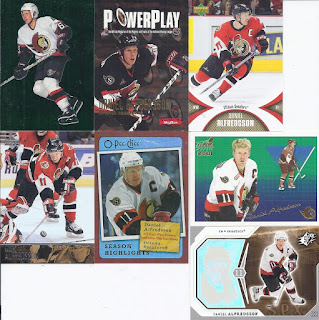 The first of the TMV/M cards can be seen here, with the 1995 Parkhurst Emerald Ice Rookie of Alfredsson. That 2003 UD flagship card is certainly a perfect example of "why didn't I have this card already?" 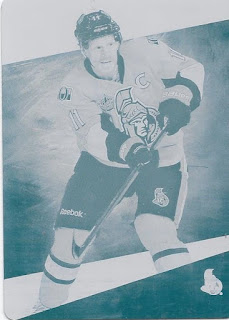 1/1 awesomeness here with a plate out of 11-12 Panini Prime. I can never get enough plates in my collection. The magenta version is also lurking on COMC, but for $36 I'll keep these family members separate. 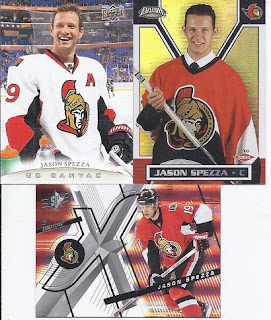 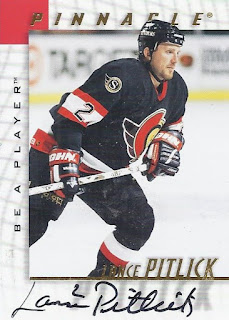 Lance Pitlcik would be a good candidate for the penmanship binder, if only he didn't put the dot over the C in his name. 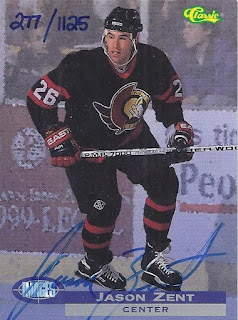 And a TMV/M card ends it, with this appearance of Jason Zent. Technically, this is an AHL card as all his Senators cards have him with the PEI Senators, but he did reach the Capital for 25 games, and that's enough for me.

And there you have it!
Posted by buckstorecards at 09:19