Back to repack land with a pair of Surprise Bags from Ye Olde Dollarama. 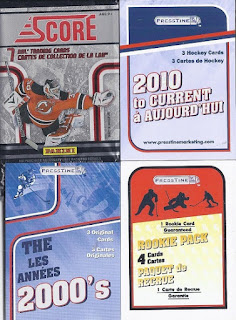 Here are the contents of repack #1!

While the middle card isn't that interesting, I like that I'm still finding the ITG:72 cards in these, and the Parkhurst are also fun finds.

Minor league card! WOO-HOO! Kyle never reached the NHL, and has been in Austria the past few years. Since I didn't try to build the flagship set this year, and random cards from that set are welcome. 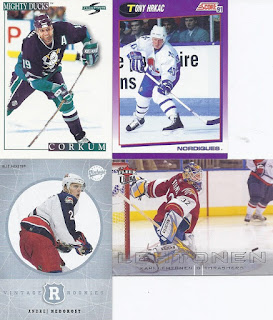 And at least my promised rookie was from a set somewhat oddball when it comes to repacks, even though I'd never heard of him. He played 28 games over three seasons in Columbus, and was in Europe through 2012. 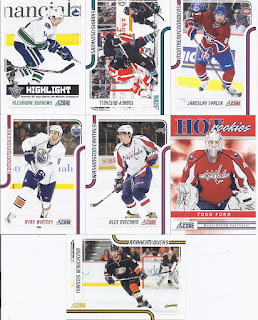 And the Score pack. Nothing too much of note here. 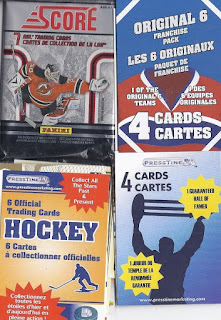 Score is lurking in this repack as well. I'm definitely getting more cards this time, but will quantity take the day? 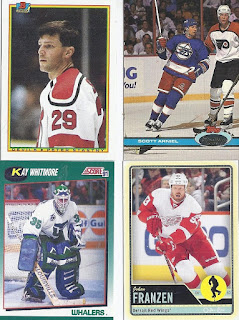 When the HOF promised is out of 1990 Bowman, probably not. But that Kay Whitmore looks really nice with the design colours alongside the Whalers uni. 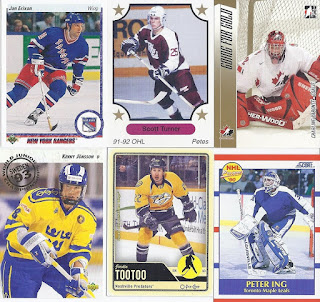 For a repack post, this has gotten surprising 2012-13 OPC intensive. The misc 6 cards is decent this time being boosted greatly by a card from the distaff side for my mask binder. I also like that they got the umlaut on the Jönsson. Not easy for 90's cards! 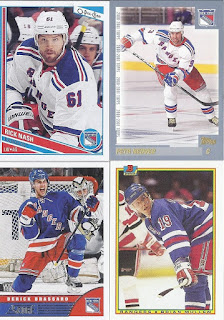 And to wrap up the repacked repacks, here's the Original 6 pack. The Brassard photo was pretty popular in 2013, as it also was used on his UD base card. 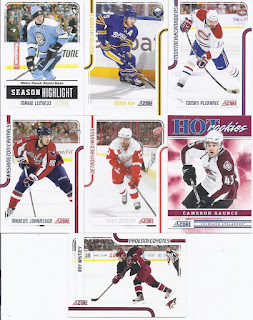 The Score pack was far better this time around with an appearance of a toque-clad Mario, a Rangers alum in Derek Roy and a rookie that's still playing on this side of the Atlantic. Interestingly, both of the glossy parallels in the two packs were both horizontal photos.

If I reach double digits for keepers, I'm happy. I did so I am.
Posted by buckstorecards at 08:18