A Rangers Round Up

Namely a round up of the Kitchener Rangers portion of a recent envelope from Dennis @ Too Many Manninghams. 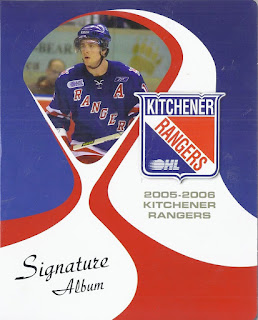 It really was only one thing, but it definitely deserves its own post. At first this appears to be some sort of mini-album. This could be nice for storing some of my favourite Rangers alum cards. You've got Evan McGrath on the cover and despite his not making the NHL, he's still a memorable player and...

Oh yeah, it came with an autographed team set of 24 cards. 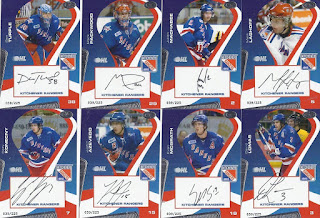 24 spaces in the album, so 24 cards makes sense. We open with this octet of players. Only Lashoff played in the NHL, but Turple got to sit on the Thrashers bench and got a couple NHL-level cards out of that appearance. Azevedo and McGrath were mid/late draft picks, and although neither reached the bigs, they've had good careers in Europe. 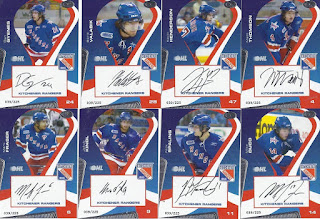 Strong NHL content in grouping #2, with only Geynes and Thomson not reaching the NHL. Valabik is a 2/14 binder member as well, but this will stay in the Rangers binder for obvious completeness reasons. Kindl had been back and forth between the AHL and NHL for his career, and spent last year in the Panthers organization. 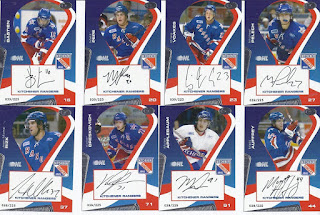 Here you have the final grouping. Only Oreskovich here played in the NHL, although Rizk was a late pick of Minnesota. You also get an appearance of an alternate jersey on Applebaum's card. The team was a black hole for penmanship this season, with mostly illegible scribbles. I can read Auffrey's first name - that might give him the nod.

And there you have one part of the recent trade. I still have 3 more parts to cover, probably in random postings over the next week or so.
Posted by buckstorecards at 09:25