When I busted my case of 13-14 Rookie Anthology, I pulled 3 redemptions. I was fairly certain I'd be heading to replacement-land with them, as none of them appeared active. I made the journey last week, and let's see what happened.

I gave a list of a quintet of players (Jim Kelly, Tyrod Taylor, Daniel Alfredsson, Norman Powell and DeMar Derozan) that I wouldn't mind seeing in the return envelope. A mix of expensive guys and not-so-expensive guys, which I thought would cover a nice range.

2 Morgan Rielly. Same card. Same case. What did these turn in to? 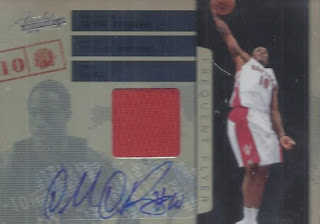 If it was going to be a Raptors addition, I was banking on some Powell. But I'll gladly take my second Demar auto/relic instead. The two Morgans would have been stickers, so that's a wash. Using COMC as a guide, the cost of the cheapest Derozan auto costs more than the two cheapest Riellys, so I'll call this a win. 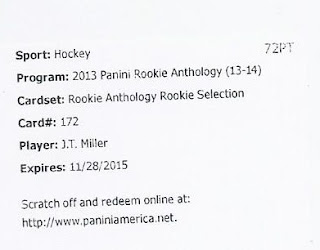 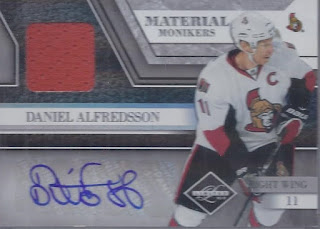 Since Panini has been out of the hockey card game for a bit, I wasn't expecting any hockey card period. Here, I get a sticker auto/relic numbered out of /25 (just like the DeRozan). As before COMC value of this card, of which another one is available at the site is greater that the only Miller auto/relic, so another win here.

Another positive experience when a replacement is needed. In lieu of the actual card, I'll take this anytime.
Posted by buckstorecards at 09:28