He might no longer be blogging, but that doesn't mean that great packages aren't heading in my direction. This package was small in volume, but strong in content. 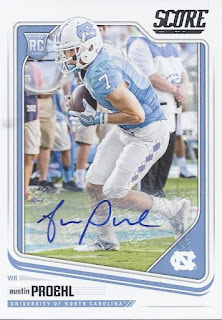 Austin Proehl was one draft pick early to be named Mr. Irrelevant in the 2018 draft. Despite the late pick, I'll still hope the son of ex-Cardinal receiver Ricky Proehl works out well in Buffalo. If not, at least I still have an auto of him. And yes, even if he never plays a game for the Bills, he still counts as a Bill. This means that Tremaine Edmunds and Robert Foster are the only two new Bills with autos that I need to hunt down. 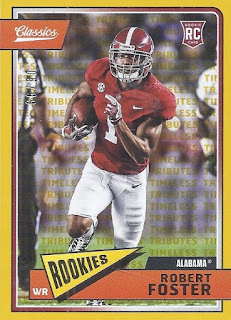 Speaking of Robert Foster, here he is! This is my third parallel of his from Classics following a case break, with this /99 joining a /50 and a /299. 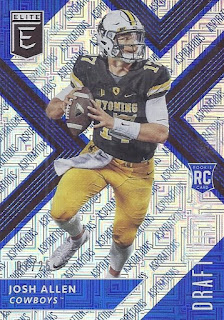 Shiny! Josh Allen is the latest QB saviour of the Bills. With guys like Rob Johnson, Trent Edwards and JP Losman being part of that illustrious group over the post-Jim Kelly era, he should at least avoid reaching the bottom 3. That's what it means to be a Bills fan - hoping they won't be as bad as you fear. 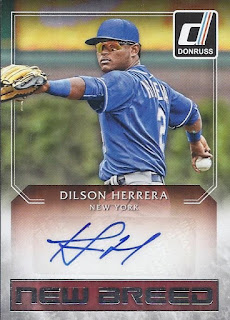 He's no longer a Met, having being moved to Cinci in the Jay Bruce trade. Still, this auto has the bonus of being set against the backdrop of a road game at Wrigley. 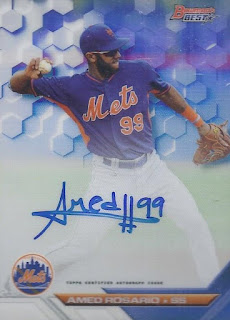 Amed may not sport #99 any more, but I still like how he he turns the 'A' into the star for his autograph. Alvin Kamara of the Saints does something similar, but the non-star portion of it isn't as legible is Rosario's. 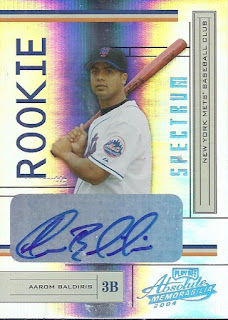 I'll be ending off with Aarom Baldiris. He never played for the Mets, or any other MLB team, but did have a decent career in Japan. Still a Mets hit though, so let's just flip this over so I can file it appropriately. 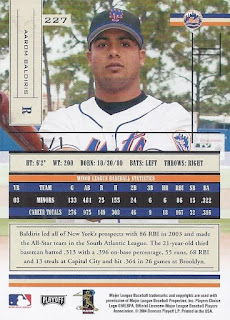 Thanks for this package! You're still trading, so I'll definitely still be on the lookout for goodies for your collection.
Posted by buckstorecards at 07:19