Miscellany really should cover more than two cards, but these were the last two left in the box that were not a hockey or football card at this point. Aside from whichever one(s) I missed. 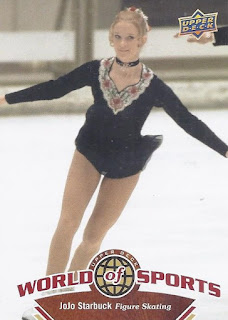 My second card of figure skater Jojo Starbuck leads the way this time. It was not until I checked ebay looking to see if there were reasonably priced autographs, found this, wondered why there is a Jojo Starbuck Steelers jersey and then googled it that I found out she was Terry Bradshaw's ex. 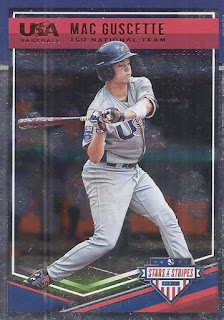 The other new card is a baseball one. Mac Guscette has been upgraded from the 14U USA baseball roster to the 15U baseball roster. meaning that searching for his cards is now just really creepy instead of incredibly creepy.

And there you have it!
Posted by buckstorecards at 06:12