When I grab the $1 hanger packs at Dollarama, I rarely make any effort to scan much more than the first visible card. No looking at the card in back, no looking all the way down the hooks to see if something is better. If something is there, fine. If not, the first one or two will suffice. That's what happened this time with this pair. 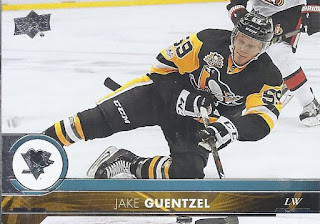 Neat photo to start, but not a need for my gradual set-build, or anything in particular but it will work as filler when another Pens package goes the way of Matt. 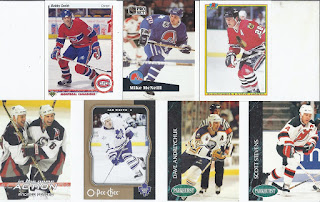 That's a pretty good first half of the pack. Two cards for my Rangers alumni collection, and I'm really happy about the Andrew Peters, since the former tough guy was a rather obscure member of the collection, and I also don't have much In the Game Action stuff in any of my binders. 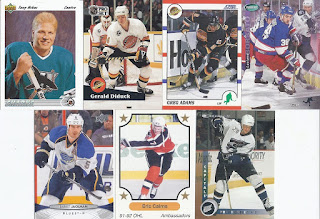 The second part wasn't as amazing (Jackman was visible), but Luciano Borsato was one of the more Italian names in NHL history. 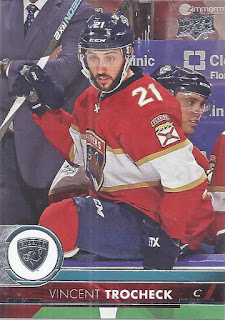 Starting off the second hanger, this one was a need for the 17-18 set. Still, I didn't really know that as I grabbed this, I'm still far enough out that I can't really post the wantlist. 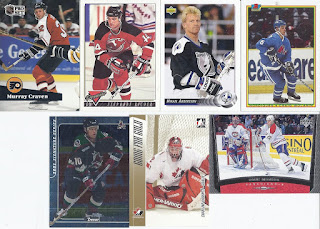 At least the first grouping of cards contained a rather patriotic entry for the mask binder. Wolanin can also go in the Rangers alum binder. 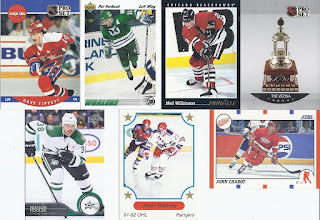 But the Rangers alum here is actually a pretty great pull for me. This one had been lurking on my zistle wantlist for ages, and I was just waiting for the opportunity to add it into one of my sportlots shipments. Gladney had some good years on some questionable early 90s teams. Considering the amount of defensive talent that has spent time in Kitchener, it is Gladney that holds the record for points in a single season. (92). Although he was drafted by the Capitals and had a lengthy minor league career, this appears to be his only card.

And it came to my collection from a $1 repack.
Posted by buckstorecards at 11:40