Back to the ol' mailbag today and some group break stuff from the two Toronto teams I root for - the Raptors and Blue Jays. 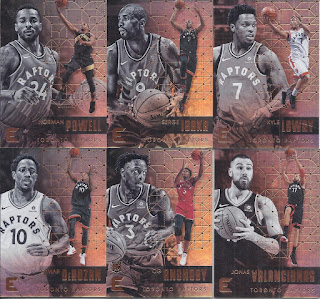 Here's the base design. Shiny, and I like the contrasting black & white/colour photos combined on the front. Sadly, it only really pops when they're wearing the red uniforms like on OG's card. 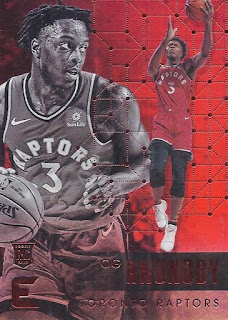 Excepting the Norman Powell, I also landed almost a complete set of the red parallels. 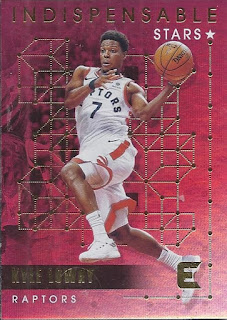 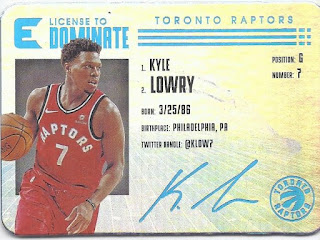 Two inserts. That is a facsimile autograph on the License to Dominate, but these still count as case hits. So, while I didn't land an actual hit in this, I did land something relatively close.

Off to baseball, and a mixer of various products. 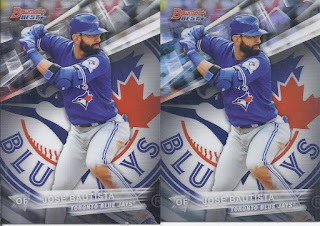 I'll go through this in relative chronological order, and start with some 2016 Bowman's Best. Only a pair of Joey Bats cards in this, but one was a nice shiny refractor. And yes, I did pick up the Topps Now card of his return to Toronto. Mainly because I thought that could be his only Mets card, since nothing is certain with Update. Then he got another Now card days later. 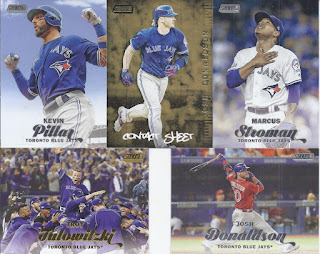 A nice selection of last year's Stadium Club, which like any year's release I can't really get enough of.

ThjA couple cards out of the rather odd Chronicles set, which was sorta like Rookie Anthology in terms of a base set, and a bunch of kinda Update-ish cards from various sets along with other unreleased Panini product lines. Spectra baseball? 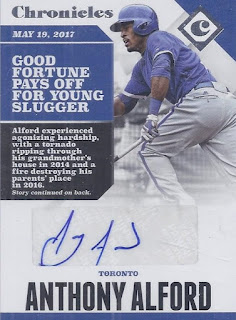 The only hit in this post was an auto, with Anthony Alford experiencing some level of sticker woe. 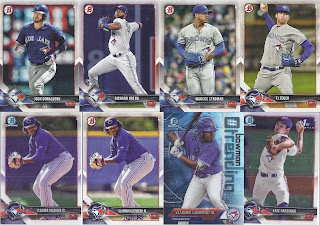 2018 Bowman! Which I've busted a grand total of nothing of, but still have picked up a few cards through breaks and trades. A trio of Vlads? Yes! 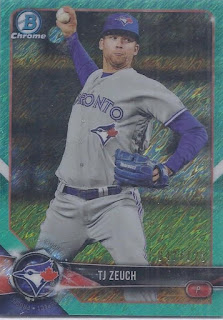 And let's throw some parallels in with this. A shimmery parallel in Blue Jays blue is up first, with this one being 47/125. 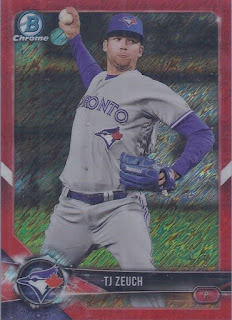 While red isn't as important a colour in the Jays uniform, it is still there. This beauty is numbered to an ebay 1/1ish 5/5. Nice, but I'd put the odds at 50/50 that it ends up in my COMC sales account at some point. Since a blue Jays card is still nicer than a red. Unless they photoshopped one of the Canada Day jerseys onto Zeuch.

There you go. Assuming the mailman doesn't drop anything off in the near future, only one more envelope and I'm caught up! Yay!

Posted by buckstorecards at 08:42