After getting caught up with my incoming mail (just for another one to arrive on Friday), I guess it is time to get caught up on some repack acquisitions over the past week(s). I'll go in reverse order of cost. 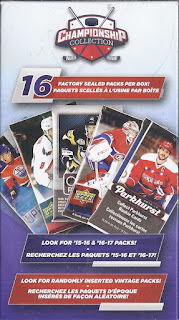 The means I'm starting with one of these 16 pack repacks from Wally World. I'd rather show than tell, so chronologically, here are the first 8 packs. 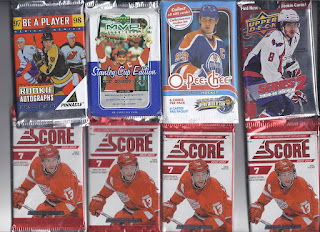 And these are they. I'm surprised to find the Be A Player pack in there, as that contains a guaranteed autograph. 4 '12 Score packs sounds about right though. 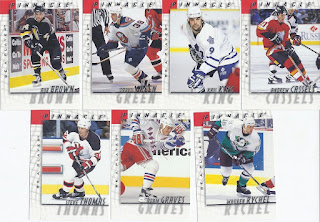 The non-auto'ed base cards in the pack. That's definitely a bunch of familiar names to mid 90's hockey fans in this bunch. And it is one of these that also got the autograph. 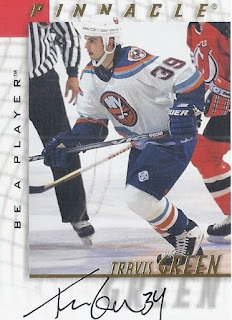 And here's the auto. Not too bad, as Green had a long playing career. At least it is better than an auto of some random rookie who played a single game. 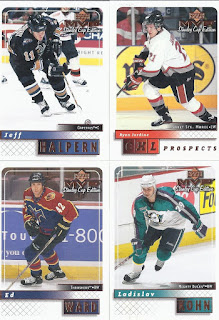 In comparison, the MVP pack had a good percentage of guys that I barely or didn't remember. 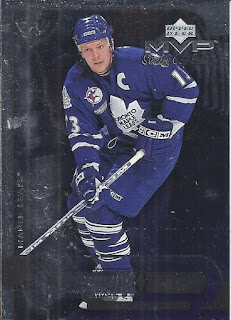 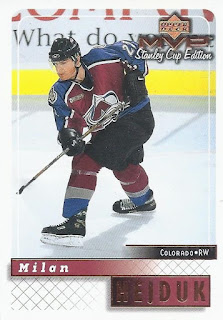 I also remember Milan Hejduk, for whom this card is my 184th card of his in the 2/14 collection. 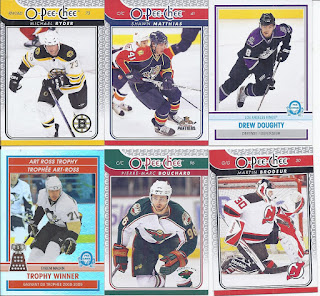 Only 6 cards in the OPC pack, so it is easy to scan all of them. Not too bad overall, with a Brodeur, a Bruins, a shiny insert and a good player for the Retro parallel. 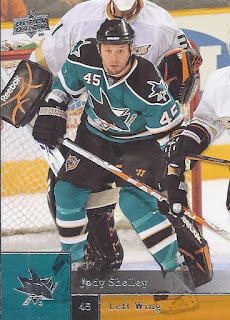 My fave base card in the UD pack was this Jody Shelley. That's because the positioning makes Curtis McElhinney look about 8 feet tall, or makes Jody look about 5 feet tall. The back of the card lists him at 6'4, so that's the former. 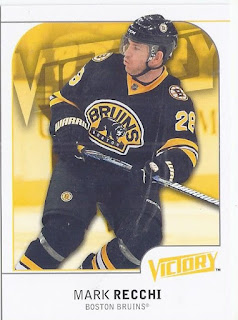 At least the Victory Update was another Bruins card. 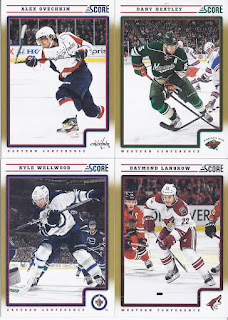 I won't scan everything from the Score packs, but here are the 4 gold parallels. That Ovechkin might be one of the least flattering photos ever used for a major star on a base card. I thought that maybe he refused to sign for Panini, but there were definitely a lot of autos available. 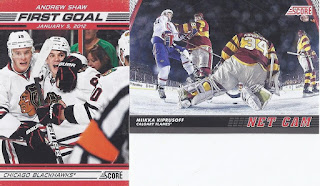 And the inserts. I really can't complain if one of them features a very unique photo from one of the outdoor games.

There you have it! 8 more packs next time, including a second hit!
Posted by buckstorecards at 09:46