My third source for repacks comes through - the local Shoppers Drug Mart. Here's one of their usual one pack hangers, although there was also a pack of 16-17 stickers in there as well. 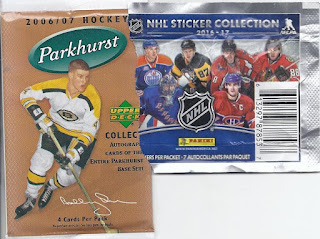 These were the packs. Parkhurst has been very good to me in repacks in the past. 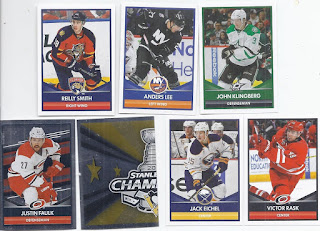 Here's the sticker pack's content.  Nothing too memorable here, but a couple of them are foil-y.

That's a solid Parkhurst pack already, with a Whaler, a Bruin and Gordie Howe. But that's 3 cards. That should mean something interesting as the final card. 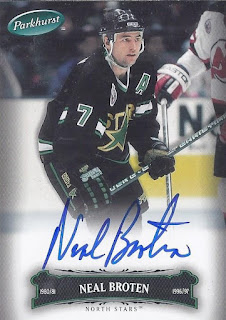 And there's another autograph! And it is of someone who doesn't really have a lot of autographs out there, but still had a very solid career. Interestingly, the card lists him as a North Star, the jersey is Minnesota, but if you flip the card over... 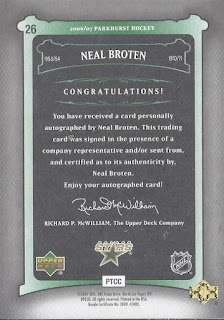 there's a Dallas logo on the reverse. Oops. It is still a really nice card despite that, especially with a very legible signature. And it is another great repack score!

Next up, back to the mailbag.
Posted by buckstorecards at 08:27