2015 Adventures in Repacks: Part 36 - And My Best Dollarama Repack Pull

I've been surprised with an onslaught of junk wax in the past from one of these, but I usually get my $2 of fun from them, if not exactly that in book value. But this time, I definitely got past the $2 value mark.

First up, a pack of 1990 Score. It was the Canadian version, so that meant that the two Hartford Whalers cards were likely needs for Shoebox Legends. 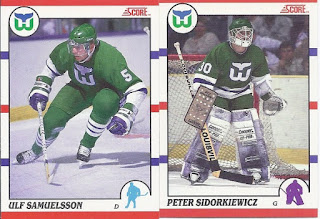 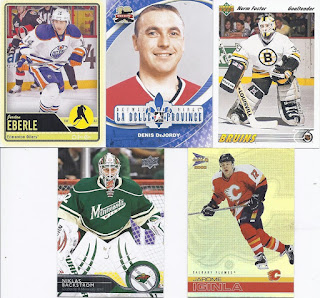 Is the superstar in this pack the Eberle or the Iginla? When in doubt, vote for the shiny one. 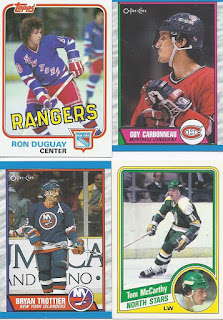 The 80s pack was pretty interesting as well. You've got a Hall of Famer, but the big winner here is the Duguay and the white guy 'fro from 1981 Topps. Ron would outdo himself on the 1983 issue, but this is still pretty great. And it would definitely put me at the $2 worth of fun factor by this one card alone.

But the big card was yet to come. The final item was a pack of 06-07 Parkhurst. 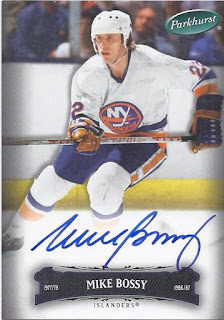 An on-card autograph of Mike Bossy!?!?

F'n incredible! I knew my repack love would hit paydirt at some point. And boy, did this one ever! I doubt this will ever be topped from a pack at the Dollarama.
Posted by buckstorecards at 08:40