Namely the rest of the teams I got randomed in the Prestige break. 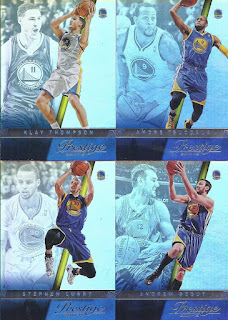 Starting up with the NBA Champs. The team colours look really nice when mixed with the shiny design. But, the collation was such that I only got 4 of the 6 base cards. No David Lee or Harrison Barnes here. 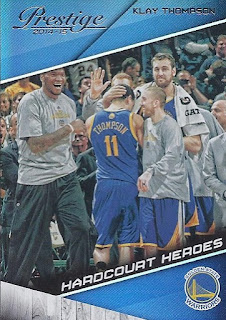 But, no hits came my way through them. But, I did get one insert - an interesting photo where the featured player isn't showing his face. 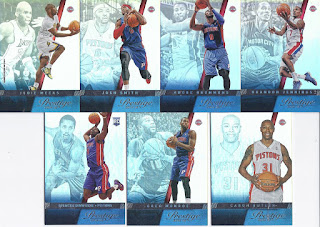 I did a little better base card wise with the Pistons. With 8 base cards, I got 7 of them, missing out on Kentavious Caldwell Pope. But I did get 4 Caron Butlers. my fave here is the Brandon Jennings, showing him in the Motor City alternate jerseys. 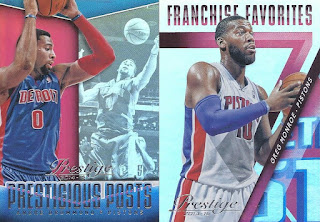 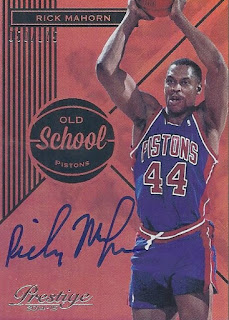 And the last of my on-card autographs from this mailer gives a great flashback to the Pistons in their Bad Boy days. I must admit that I'm very amused that he seems to sign his autographs 'Ricky'. But that's a really nice addition to my keeper pile. 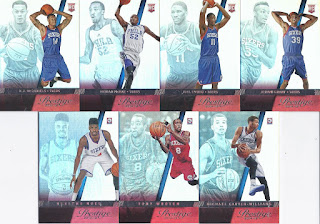 Finally, Philadelphia! I think this is the complete base set for the team. Considering that 4 of the 7 cards were rookies, there's the reason they struggled this past season. And Nerlens Noel wasn't a rookie on his card, but was one in reality, making it 5 out of 7. 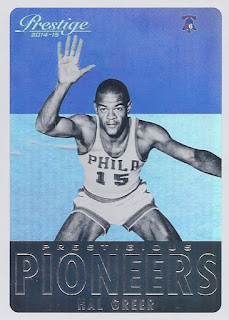 I wish the old school logo in the corner was a little bigger, but that's my only complaint about this.

And, a couple autos to wrap things up. 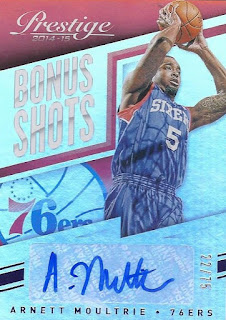 Depressingly, Arnett is in the upper percentile when it comes to quality penmanship among current NBAers. You can actually parse it, which is always a plus. 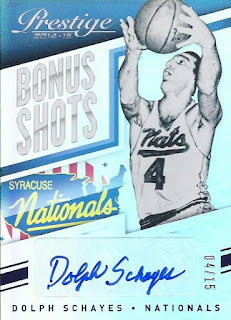 How about a /15 autograph of a legend from the early days of the game? For someone who was in his mid 80s when he signed the sticker, he's still got some great penmanship. Plus, you have a nice shiny look at the Syracuse Nationals logo. The Nationals became the 76ers, hence this sure keeper ending up in my greedy hands.

But, there is still more to come from this break. Bonus Packs! 2 packs of Bowman Platinum Asia edition, and several packs of 2015 Stars and Stripes!

And the Panini Convention silver packs!

2 more days of posts!
Posted by buckstorecards at 10:46