The first time I went through the Panini Rewards point thing, I used 250 points to pick up a Gordie Howe relic. Unfortunately, there was shipping to pay as well, and I then vowed to wait until I got more points before going on a shopping spree there.

750 points later, it was time to pick up some autographs, and I added one football, and two baseball and two basketball autos to my collection. 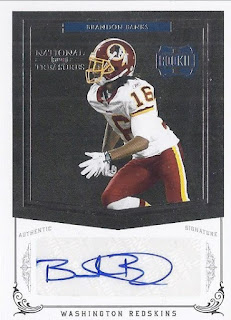 This was the football addition. While he has settled down a bit from his kick/punt returning escapades that he started the season with, but he's still a threat to run for 6 every time a team kicks the ball to him. This card is 69/99. Or 66/69. Probably the former. 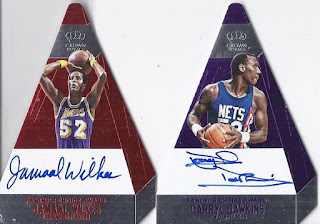 Jamaal Wilkes is on his way to my penmanship collection. As for the Dawkins, here's how it goes.

I get a redemption for a Dawkins autograph out of 13-14 Totally Certified. A couple weeks back, I decide to see if I can get a replacement. I request one of Dawkins if possible to replace it, if possible. Then Dawkins passes away, and I decide there's no way I'm seeing that one come through. I pick up this one /25, and less than 24 hours later I get notice that the replacement came through and it was for a Dawkins.

So, now I've got two. This one is on-card, so I'm more likely to keep this one. 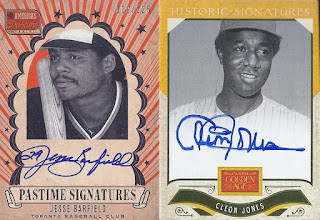 And the two baseball autos. This is my second Barfield auto. This one is on its way intop my Jays collection, while the current one is moving into the penmanship collection. The older one had more space for an auto, and the penmanship is better on that one as a result. And then there's a nice on-card Cleon Jones autograph, and that's my first auto of his.

All of these for 150 points each. It was worth the wait to cash them in with this take.

Posted by buckstorecards at 12:48