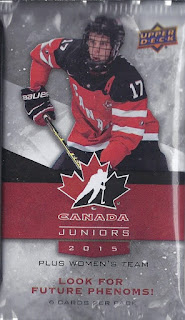 Here's the pack. This is the first of many this season that will be featuring Connor McDavid on the front. I opted for 2 packs of this product. 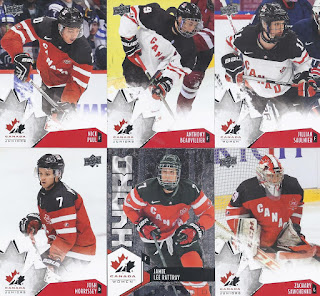 Nice clean design. Full bleed throughout most of the base, with the border, such as it is, being red, white and maple leafy. No difference between the women's portion and the junior portion in terms of base design. The silvery card is a Hydro insert base. They fall at a rate of 1:5. 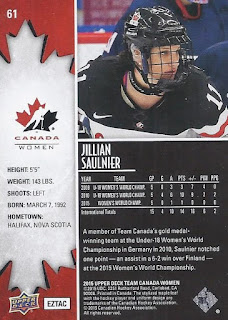 Here are the backs of the cards. Typical UD. Usually, I'd complain about partial stats, but since the stats on these are limited to international play, they probably aren't truncated that much. 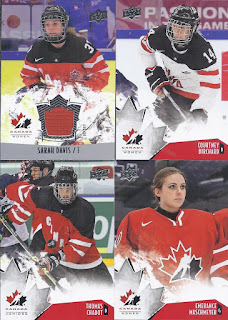 And here's pack 2. This was one of the odder packs I've ever opened. Mainly because it was the first one I've ever opened that contained both a dummy card and a relic hit. The women's jersey cards are a little tougher pull than the men's, falling at 1:30 as opposed to 1:20. So, I'm quite happy to get this, which I'm assuming is the first women's jersey relic in my collection.

Still, getting a dummy card instead of a couple more base cards is kind of a bummer. UD doesn't have the typical Topps "Packs with a relic contain fewer cards" disclaimer on them.

And I do realize that I'm criticizing a pack that contained a hit. What an  ungrateful soul I am.
Posted by buckstorecards at 15:31