It is the big set build of the year for the hockey types. 600 different cardboards to make the set. While I haven't officially planned to build this set for 15-16, I can at least sample some. 1 pack, and 4 singles for my PC seems like reasonable start. 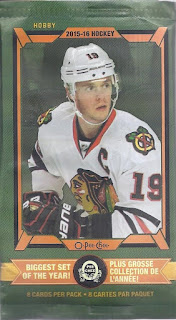 At least Upper Deck didn't have to change their packaging for this to put Toews on the front. 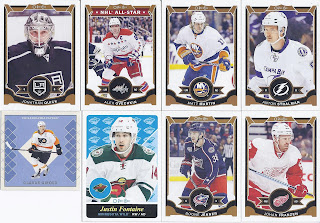 The first card out of 2015 is a card perfect for my mask binder should I not build the set. The Ovie is card #400 in the set, meaning that O-Pee-Chee has lifted from Topps this year and put the biggest names in the '00' spots (Stamkos, Price, Toews, Ovechkin and Crosby respectively). Checklists are 51s this year. The V Series minis fall at a rate of 2 per hobby box. They seem very argyle this year. I really like the retros this year, and can see at least trying for the Sens team set. 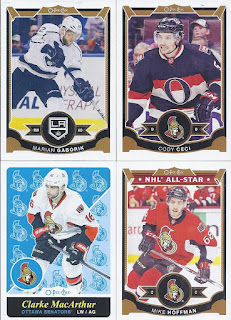 A here were the 4 sample cards I got. A new Gaborik for the 2/14 collection. It is nice to see Mike Hoffman make his OPC debut after a good full season with the team. 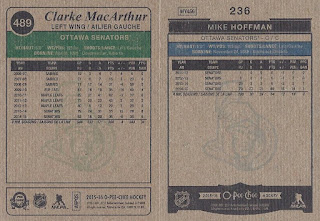 And the card backs. Nothing too special here other than the full career stats on both the retro and the standard base cards.