I grabbed the Toronto Blue Jays in a Jumbo Chrome case break. They had a trio of on-card rookie autographs in the set, and I was hoping all three would come my way. 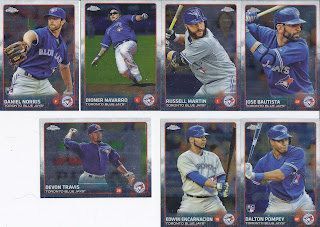 Here's the base set, of which I got about 6 sets worth. Much as I love that photo on the Navarro, he really isn't the type of guy you'd figure would make the cut in a smaller base set. 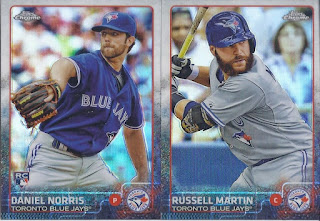 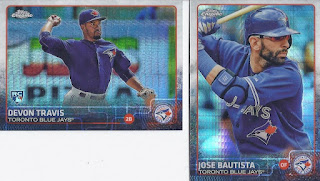 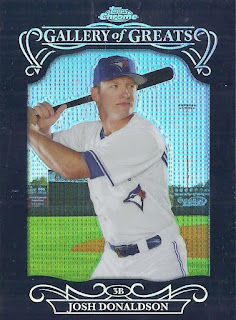 The Jays had a pair of cards in the Gallery of Greats insert, with a Bautista alongside this Josh Donaldson. I liked these in the regular set, and they're even nicer here. 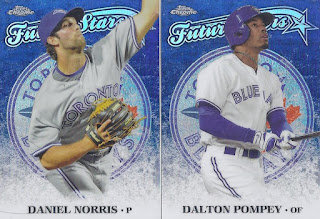 More shiny inserts. I'm OK with these  since I like the logo background here.

But, I wanted some new autos for my Jays binder. How'd I do? 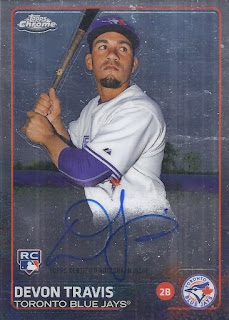 Here's a base autograph of Devon Travis. His rookie season has been pretty good when he was healthy. 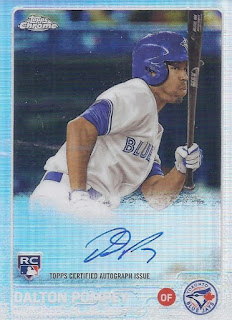 Next up, a shiny refractor auto of a local guy in the lineup. Mississauga is close enough to be called Toronto, right? 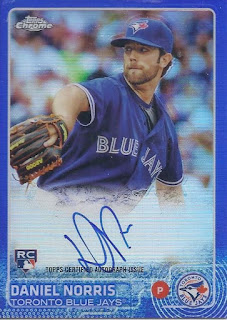 And the third of the autos, and the lowest numbered of the bunch. The blue refractor works with the blue uniform to create a gorgeous card. Coloured refractors are always nicer in that circumstance.

So. 3 for 3 in terms of getting the desired autographs, with 2 of them being numbered parallels. I definitely got what I wanted from this one.
Posted by buckstorecards at 14:27