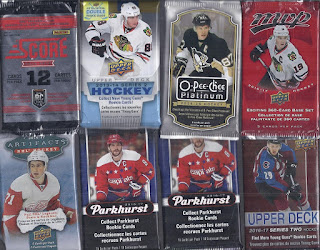 And these are 6 packs! 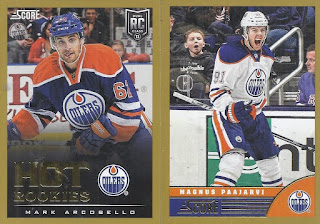 Two gold cards in the 2013 Score pack, but sadly for me both were dupes for my "I've got a bunch of cards from it, but I'm not really building this parallel set" set. 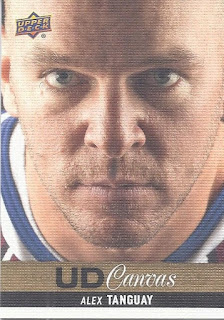 No Young Gun in the 13-14 UD pack, but I did get Alex Tanguay looking like a serial killer. So there's that. 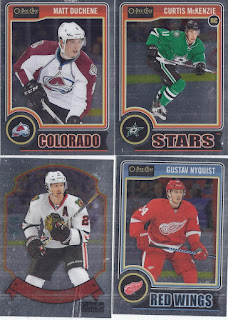 It is only 4 cards, so I'll just show all the cards out of the Platinum pack. Interestingly, the base cards are significantly bowed, but the retro card of Duncan Keith wasn't. Card technology rules! 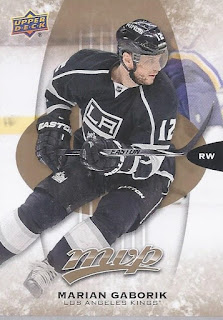 Just base cards in the MVP pack, One of them was my 168th Gaborik for the 2/14 collection. 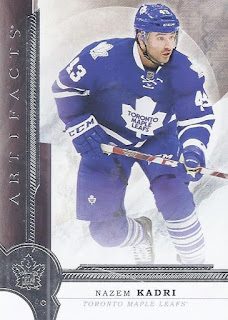 Another PC hit in the Artifacts pack, with this Kadri on its way into my Kitchener Rangers alum collection. 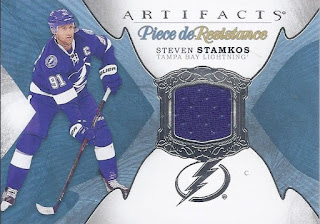 And the other hit of the repack box is a Stamkos swatch. The pack odds list Piece de Resistance relics as 1:80, so that's some solid odds to get a hit.

The highlights of the two Parkhurst packs: A Senator, an Ovechkin insert and some Cal Clutterbuck. Just about right for a repack. 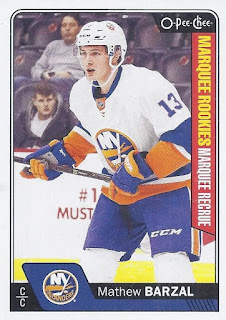 As before, no Young Guns card in this UD pack, but this is one of the better OPC update cards to land, even though he was a season away from real Marquee Rookie status at this point.

Posted by buckstorecards at 07:15