Turning Back The Clock

Last night, Clouts 'n' Chara, my LCS, had a turn back the clock break, featuring misc products from the 2000s. For $24, I could get a random team from these boxes:

A good price and a cheap entry fee! Why not?

I continued my trend as being unable to avoid the Panthers, as that's who the randomizer landed on. Still, I got some nice cards, including some numbered ones.

Going chronologically through the list, I'll start with Parkhurst. 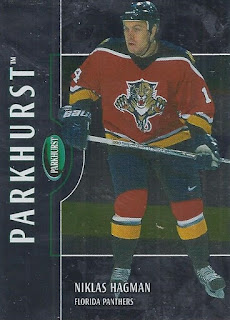 I only landed one card, but it was a nice one. You can't tell from the front, but this was a silver parallel and was numbered to a palindromic 05/50. Given that numbered cards weren't that easy of a pull at the time, this was probably among the better non-hit cards landed.

That's a team set from Rookie Update. The mask binder will be getting that Luongo (one of several I landed), and I love the contrast with the Swedish player on the American flag rink board ad.

There's Luongo again, and with his head in perfect position for the Pink Panther to be visible. I'd completely blanked on Sandis spending time with Florida, but he was there for parts of two seasons. 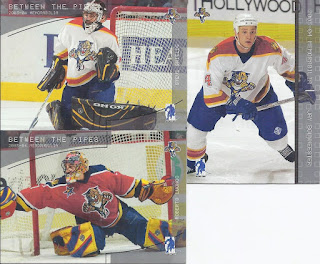 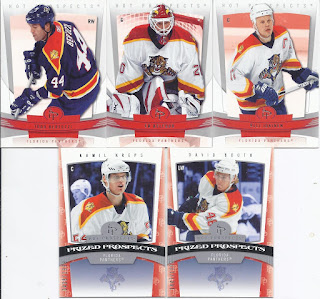 Hot Prospects brought the volume with these 5. There's Ed Belfour in one of the many unfamiliar sweaters from his later playing days. Both the cards on the bottom are numbered base. While David Booth had the longer career, I'm far more interested in the Kreps. While he spent 3+ seasons in the league, this was the only card from his rookie season. His only other card would come in 08-09 OPC along with its parallels. 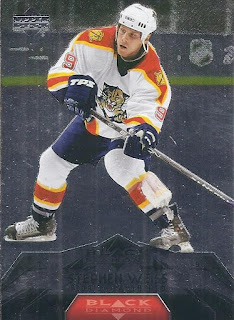 And to end with a whimper, the only card from Black Diamond.

Lots of fun cards from this!
Posted by buckstorecards at 08:48