How did my Senators collection grow at the Expo? Time to start showing off these team collection cards! 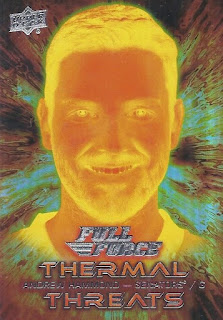 If nothing else, it got brighter. This Thermal Threats out of Full Force is definitely something. And by something, I mean something I hope is a one-and-done inserts series. But, it is a Sens card for the ol' PC. 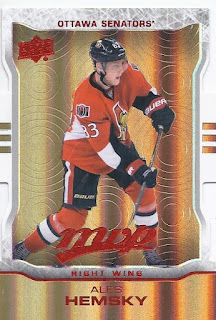 The colours and contours parallels have been in MVP for the past few years since MVP returned as a stand-alone product. Thankfully, they've toned down quite a bit since the first year, as well as having dropped in price on the secondary market, since they're plentiful in e-packs, and can be found in the 40 cent range for base cards on COMC. 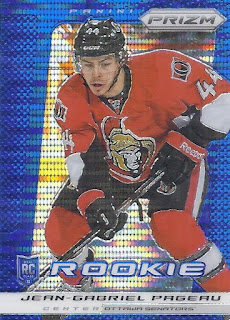 These, I like. The Wal-mart parallels out of 2013-14 Prizm might be nicer than many of the hobby variations that year. 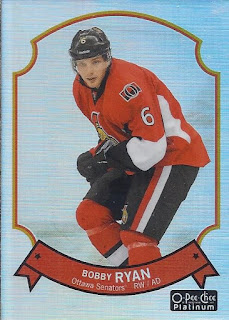 One last card in the brightness category is this retro rainbow parallel of Bobby Ryan. I still don't get why a retro themed parallel set would have these shiny parallels, but I'll always add one for a cheap price to my collection. 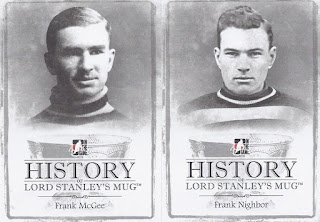 From the shiny to something very subdued, a couple of cards from ITG's Lord Stanley's Mug set. It was kind of a upper-mid set, with the box containing 3 relics, 2 autos and some base cards and non-hit inserts. These black-and-white beauties feature players from the original hockey run in Ottawa. With a nickname like "One-Eyed", Frank McGee should get more cardboard appearances. 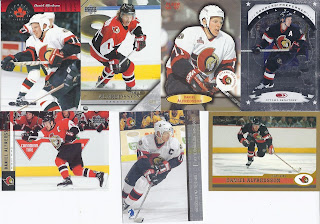 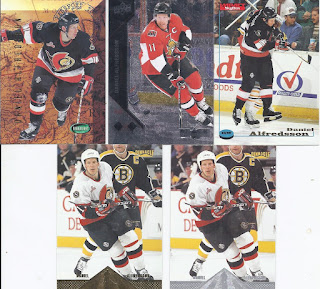 The best thing about raiding a dime box is that raiding  it for all the Alfredsson content doesn't mean I take a big hit if the cards I pull are dupes. In this case the dupes were the 2 UD flagship cards and the Canadian Ice cards are the dupes among the top. The silver border card on the bottom is the only other one. And hey, getting a double diamond card for a dime is pretty nice.

More Sens stuff from the Expo to come in a future post!
Posted by buckstorecards at 12:56